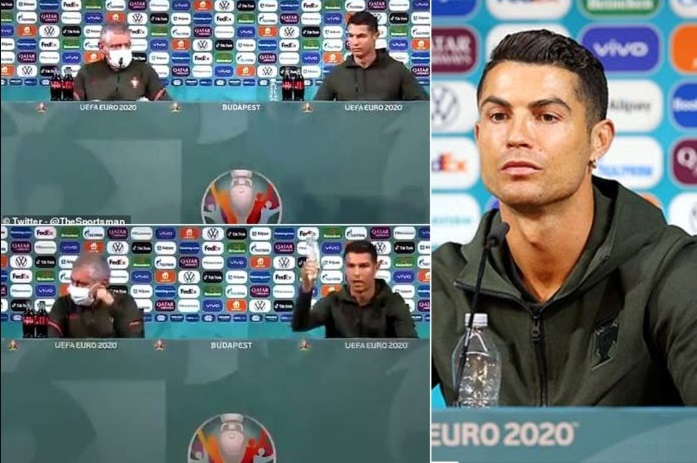 EURO 2020 – Cristiano Ronaldo vs Coca Cola: World’s most admired & followed football star Cristiano Ronaldo’s burst on the field completely destroyed Hungary on Tuesday and his outburst against Coca Cola off the field has costed the company $4 Billion in valuation.

EURO 2020 – Cristiano Ronaldo vs Coca Cola: Coke is a sponsor of Euro 2020. Spanish paper Marca reported that the company’s shares took a dive, and meant billions of dollars in losses.

🥤👀 Cristiano Ronaldo wasn't pleased with the bottles of coke at his press conference and shouted 'drink water!'…#POR | #CR7 pic.twitter.com/QwKeyKx2II

The stock market opened at 3pm in Europe. At that time, the Coca-Cola share was close to 56.10 dollars. 30 minutes later, when Cristiano Ronaldo and Fernando Santos stepped into the press room at the Puskas Ferenc Stadium in Budapest, stocks plummeted to a low of $ 55.22 per share.

The gesture of putting the bottles aside caused a brutal 1.6% drop for the company on the stock market. And in economic terms, Coca-Cola went from being worth $242 billion to $238 billion .Total losses of $4 billion.

EURO 2020 – Cristiano Ronaldo vs Coca Cola: Company issues statement: Coke has since issued a statement in response to CR7’s actions, saying “everyone is entitled to their drink preferences” and that everyone has different “tastes and needs”.

A spokesperson added: “Players are offered water, alongside Coca-Cola and Coca-Cola Zero Sugar, on arrival at our press conferences.”

EURO 2020 – Cristiano Ronaldo vs Coca Cola: Why Ronaldo got angry in the Press-Conference? As soon as Ronaldo sat for the press-conference before the game against Hungary, he saw bottle of Coca-Cola placed in front of him. Ronaldo who is known for very disciplined diet, immediately removed the bottles.

The brand is an official sponsor of the tournament and had the product on display, but the Portuguese star could not bring himself to even look at the bottles as he swiftly moved them away.

The issue did not end there. After sitting down, Ronaldo then shouted ‘drink water’ making his views very clear.

The 36-year-old is very particular about the diet – and just the sight of Coca-Cola bottles in front of him made him angry and uncomfortable.
Ronaldo has a very particular diet routine and any kind of aerated drink is complete ‘NO-NO’ for him according to many reports.

According to a report by ESPN last year, Ronaldo eats 6 meals and takes 5 90-minutes naps a day.
– Ronaldo is known to start his days with ham and cheese and a side of yogurt for breakfast.
– When he gets hungry a little later in the day, the 35-year-old likes to snack on avocado toast.
– He typically eats two lunches and two dinners to fuel the rest of his day.

With such a disciplined approach Ronaldo is all set to be in peak condition as Portugal starts their Euro 2020 campaign against Hungary.

On the field, Ronaldo’s magic continued once again as he played a a very vital role in securing three points in the second half at the Ferenc Puskas Stadium.

Raphael Guerreiro gave Portugal the lead before a Ronaldo penalty and another close-range effort in injury time wrapped up an impressive 3-0 win.

He now has record 106 international goals in 176 games.