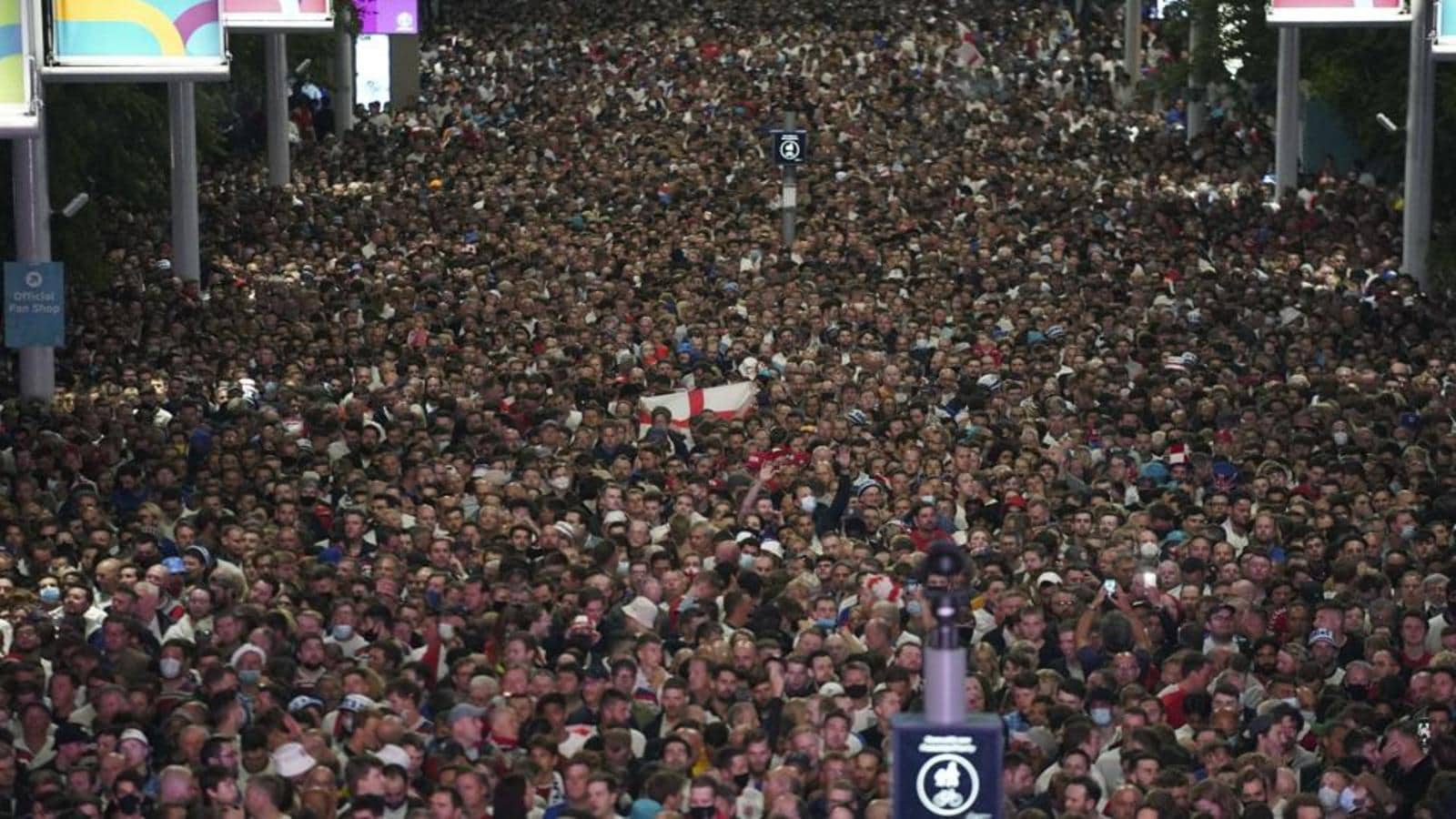 Cases rise in Russia, England, Italy and even Finland as groups, mostly male, congregate often without masksOn Thursday, prominent medical journal The Lancet published a letter signed by a group of over 100 scientists from across the world calling on the UK government to not go ahead with its plan to lift Covid-19 restrictions on July 19. Highlighting five points against full reopening of the economy, the scientists termed the decision “a dangerous and unethical experiment”.

A full reopening of the country would have long-term repercussions in the context of the coronavirus pandemic, the letter argued. “This strategy risks creating a generation left with chronic health problems and disability, the personal and economic impacts of which might be felt for decades to come,” a part of it read, underling the threats posed to unvaccinated children and young people.

The United Kingdom is witnessing a latest surge in Covid cases, with over 30,000 new cases each being reported on Wednesday and Thursday. While the deaths have also risen, mortality rate is relatively low, with a total of 70 Covid deaths being reported on both these days.

According to UK government figures updated till July 7, at least 86.6% of the country’s adult population has received at least one dose of a Covid-19 vaccine while 64.9% adults have been fully vaccinated. These high vaccination rates have given the government the confidence to go ahead with its reopening plans, with the country’s Prime Minister Boris Johnson terming Covid as a virus “we learn to live with as we already do with flu”.

The reopening of the country is set to come eight days after the end of the European Championship, which has seen eight games being played at London’s Wembley Stadium this summer. At the semi-finals, the stadium saw spectator capacity being expanded to 60,000 following discussions between UEFA and British authorities. Sunday’s much-anticipated final between England and Italy will have the same capacity.

Fans do need to show either proof of vaccination or a negative test result to be allowed into the stadium. But as TV footage from the ground and viral videos from pubs and other public places in and around England have shown, masks and social distancing have been largely absent from these gatherings.

Crowding during Euro games has not been limited to England of course. With many European countries boasting of high vaccination rates – crowds have been allowed at stadia or public screenings.

According a howindialives.com report published in Mint on Friday, nine of the 12 European countries that have allowed crowds at international sporting events have fully vaccinated at least 33% of their total population and more than half of their citizens have received at least one dose.

But Euro 2020 has fuelled a rise in cases in a number of countries apart from the UK. Russia, for instance, started registering over 20000 daily cases late last month for the first time since January. Authorities in Finland, where daily cases are still in hundreds, have also attributed a recent rise to travelling fans. Many of these cases include fans who returned from Finland’s games in Saint Petersburg.

Italy’s daily case count too has seen a slight increase over the past couple of days after a steep fall since May. A Reuters report quoted multiple experts, as well an Imperial College study, as stating that the surge is higher among younger adults, mainly men.

“It’s that demographic, those football-loving, male, predominantly, individuals of a particular age group that we’re now seeing a surge in,” Denis Kinane, an immunologist, was quoted as saying in the report. “The most plausible explanation is that men are having more frequent close contacts,” Steven Riley, professor of Infectious Disease Dynamics at the London University, also told Reuters.

In a media briefing last week, the World Health Organization (WHO) said that gatherings due to Euro 2020 had fuelled a 10% rise in cases in Europe after a 10-week decline. It warned that gatherings at public places during the tournament were the main drivers of the surge.

“We need to look much beyond just the stadiums themselves,” WHO’s senior emergency officer, Catherine Smallwood, said. “We need to look at how people get there, are they travelling in large crowded convoys of buses? And when they leave the stadiums, are they going into crowded bars and pubs to watch the matches? It is these small continuous events that are driving the spread of the virus.”

Unlike the Euro the Olympics will be the first Summer Games without spectators, with the country’s premier Yoshihide Suga on Thursday announcing a new spate of restrictions in Tokyo from July 12 to August 22 after a spike in cases. The Covid surge in Europe at the time of Euro 2020 must have been noted by both authorities in Japan and the International Olympic Committee (IOC).

Japan has fully vaccinated only 16% of its total population as on July 7 and around 43% of its citizens have received at least one dose, which may partly explain the caution exercised by Tokyo.

With the highly contagious Delta variant being the dominant strain in several countries, there are fears that the Euro 2020 surge will lead to a further explosion of cases after the July 19 reopening of the UK, which will further impede global efforts to contain the pandemic.

Many models have predicted daily cases will cross 100,000 in the UK in a few weeks’ time. It is a possibility that even UK health secretary Sajid Javid has admitted to. The UK’s high vaccination rates may keep its mortality rate low for now but its long-term fallout, particularly on countries with lower vaccination rates, remains to be seen.

“Preliminary modelling data suggest the government’s strategy provides fertile ground for the emergence of vaccine-resistant variants. This would place all at risk, including those already vaccinated, within the UK and globally,” stated the letter in The Lancet.

Irrespective of whether the UK government goes back on its reopening plans or not, the European Championship may have already caused some serious damage to global Covid management efforts.

Copa America: Lionel Messi, Neymar To Battle In Dream Final For 1st Title
500 days to go: Qatar gears up to welcome one million fans at FIFA WC in 2022