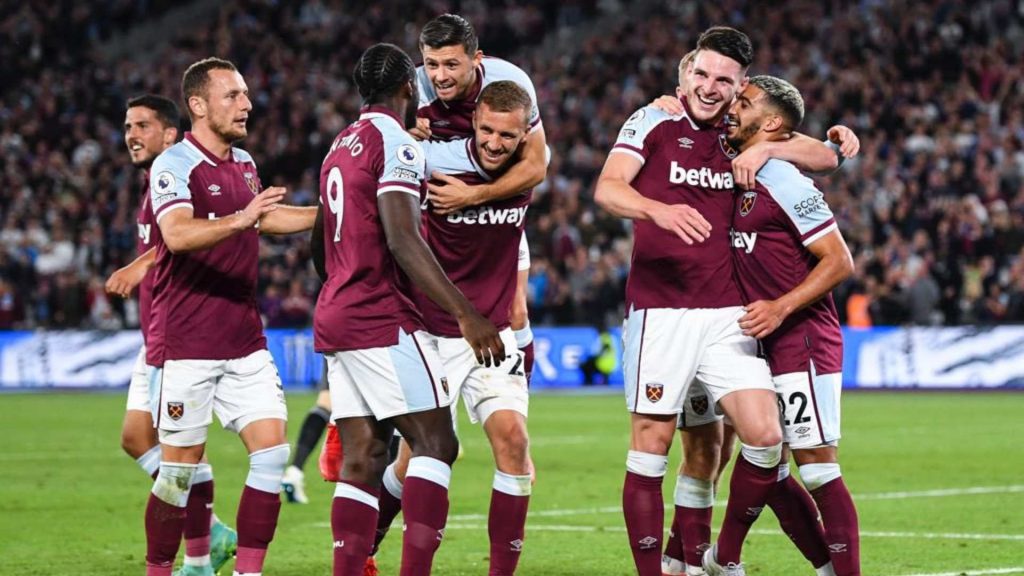 Michail Antonio became West Ham United’s all-time Premier League top scorer after netting twice to help secure a resounding 4-1 home win on Monday (August 23) over Leicester City, who had Ayoze Perez sent off late in the first half. Pablo Fornals and Said Benrahma had opened the scoring for the Hammers, who made it two wins out of two and went top of the table on goals scored after a superb performance in a cracking atmosphere at the London stadium.

Having headed into the match tied on 47 league goals with West Ham’s former stalwart Paolo Di Canio, Antonio was delighted to have surpassed the Italian as he celebrated by lifting a cardboard cut-out of himself at the side of the pitch. “You have to try and be professional but I was trying to make history so it’s always in the back of your mind,” the 31-year old forward told media.

“I’ve not been celebrating lately because of VAR, so I thought I had to make it special. The celebration was ‘Save The Last Dance’… the lift from the end. That would have been proper embarrassing if it was ruled out by VAR. You always see me smiling so you’d probably see me laughing as well.

“The fans are still here singing 20 minutes later. The atmosphere is amazing. There’s nothing better than scoring and hearing the roar of the fans.”

Fornals fired the hosts ahead in the 26th minute as he started and finished a flowing move by steering Benrahma’s low cross into the net before Perez was shown a red card in the 40th for stamping on the Spaniard as they tussled for the ball. West Ham continued to dominate and Benrahma doubled their advantage in the 56th with a simple finish past a defender on the line after Antonio intercepted Caglar Soyuncu’a back pass and squared the ball to the Algerian forward.

Youri Tielemans pulled a goal back for Leicester in the 69th minute when he pounced on a loose ball in the penalty area and poked it past goalkeeper Lukasz Fabianski from eight meters.

But Antonio made it 3-1 in the 80th when he took a Declan Rice cross in his stride and buried a low shot after turning Soyuncu before putting the icing on the cake four minutes later. West Ham manager David Moyes said he was unhappy with Antonio’s first-half performance but heaped praise on the striker for his contribution after the break.

“I was disappointed with the way he played in the first half but he did enough to shut the manager up after what I said to him at halftime,” Moyes told the BBC. “The first thing is to make sure we keep playing like this. I’ve challenged the players to find that extra two points that could have been enough to get us in the Champions League (last season).

“I could be asking far too much but what else am I going to do? Stand here and say we want to avoid relegation?”