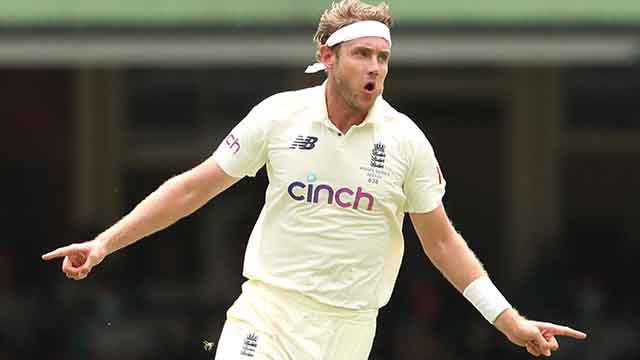 London: England fast bowler Stuart Broad on Sunday said his controversial axing from the team to tour the West Indies was delivered in a “five-minute phone call” which has “affected my sleep”.

Broad, 35, has 537 Test wickets to his name but he and fellow veteran James Anderson, who is the country’s record wicket taker with 640 victims, were dropped following the 4-0 Ashes rout in Australia.

Anderson, 39, topped England’s bowling averages in the series with his eight wickets costing just 23.37 apiece, while Broad took the tourists’ first five-for of the trip in Sydney.

Both, however, were left out of the squad to play a three-match Test series in the West Indies next month. “I am struggling to put things into context. It’s hard to do so when all you’ve had is a five-minute phone call and nothing else,” Broad wrote in his Mail on Sunday column.

“Not to big it up too much but it has affected my sleep. I said to my partner Mollie one morning that my body felt sore. She suggested that would be stress.

“No, I can’t pretend I am as good as gold, because I am not. It would be wrong to act like everything’s OK.”

Andrew Strauss, interim managing director of England men’s cricket, had insisted Anderson and Broad could still have a part to play in the future despite their unexpected exiles.

However, that reassurance failed to cushion the blow for Broad who believes his current form, and that of Anderson, stands up to the toughest scrutiny.

“I took 11 wickets in the final two Ashes matches, I have been Test match standard for a long time and, for the last eight years, you would say world class,” he said.

“I could take being dropped if I had let my standards slip but facing up to being overlooked when they haven’t is another thing altogether.

“That’s why I was so outspoken when I was left out against West Indies in Southampton a couple of years ago. It felt unjust.”

England’s first Test against the West Indies in Antigua starts on 8 March.