England’s Joe Root, Ben Stokes touch down in Australia ahead of Ashes 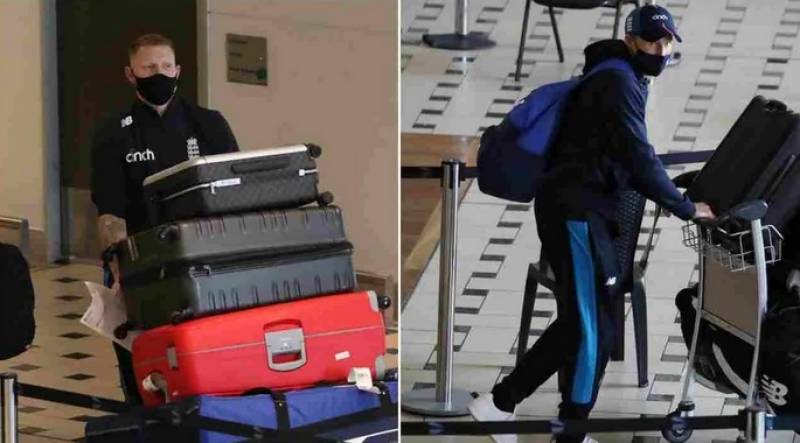 Joe Root and Ben Stokes led the first wave of England’s cricketing superstars to land in Brisbane Saturday ahead of the five-Test Ashes series against Australia.

The squad, still to be joined by members of England’s Twenty20 World Cup side, walked through the terminal and into a waiting bus bound for 14 days’ quarantine on the Gold Coast. The early arrival gives the team a month to acclimatise to the Australian summer before the first Test starts on 8 December.

Although the team will be under strict quarantine, Cricket Australia confirmed players would be allowed to train at Metricon Stadium throughout their isolation period.

The talismanic Stokes, who has not played any cricket since July because of a finger injury and mental health issues, was only added to the 17-man squad last month.

Ben Stokes would be making his first appearance for England since taking a leave for mental health reasons. AP

Stokes made his Ashes debut in 2013/14, scoring a maiden Test century in tough batting conditions in Perth but failing to prevent a 5-0 whitewash.

“One thing I think we can take a lot of heart and confidence from is the way India went and played there in their (Australia’s) last home series,” Root told a conference call on Tuesday.

“They took them on in their own way, they played to their strengths, but they didn’t take a backward step at any stage.”

T20 World Cup 2021: Watch Scotland cricketers share ‘priceless’ moments with Virat Kohli and Co
On This Day in 2009: When Sachin Tendulkar’s 175 off 141 Scared the Aussies Despite Massive Score of 351