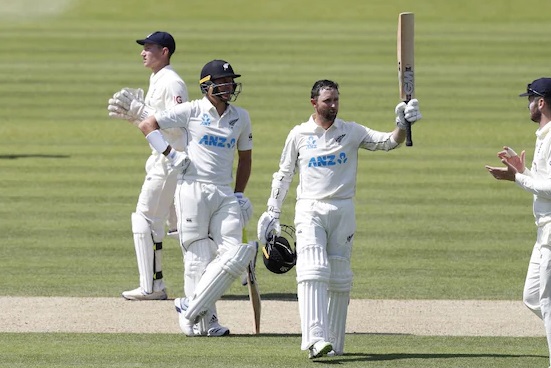 New Zealand opening batsman Devon Conway became the first batsman to score a double century on debut in England when he finished on 200 in New Zealand’s first innings of the first Test against at Lord’s on Thursday. Conway had on Wednesday broken former India captain Sourav Ganguly’s 25-year-old record by becoming the highest scorer on debut at Lord’s. Conway surpassed Ganguly’s 131 to finish 136 not out at the end of Day 1. The left-hander added 64 more runs to his overnight score and was the last man out in New Zealand’s first innings of 378.

Conway also became the second New Zealand batsman after Matthew Sinclair and seventh in Test history to make a double hundred on debut. Sinclar had made 214 against the West Indies on his debut in Wellington in 1999.

“When we arrived at Lord’s a couple days ago we walked into the changing room and got the opportunity to have a look at the all the legends and the names up on that honours board,” said Conway on Wednesday.

“Funny enough I had a conversation with Kane asking what it feels like to see your name on that board [for Williamson’s hundred at Lord’s in 2015], and the first thing he said when I went up into the changing room was ‘Now you know what it’s like, bro’. It’s pretty cool, it’s a great place and I’m grateful my name can go up there,” he added.