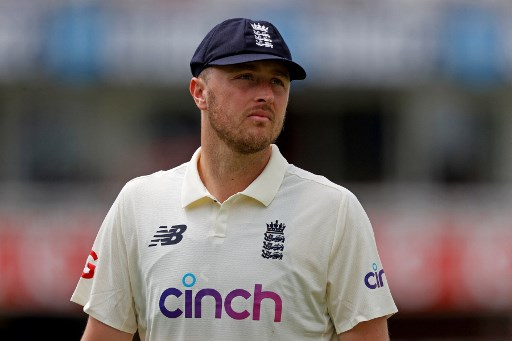 Ollie Robinson was recalled to the England squad on Wednesday for next month’s first two matches of a Test series against India following a Twitter racism row that overshadowed his debut. On Wednesday, England named a 17-member squad for the first two Tests, starting August 4 in Nottingham. Robinson received an eight-game ban, five of them deferred, for racist and sexist tweets he posted in 2012 and 2013 that came to light again during the 27-year-old’s Test bow against New Zealand at Lord’s in June. But a disciplinary hearing paved the way for the seamer to feature against India after deeming Robinson had already served a three-game ban, having been suspended from the second Test against New Zealand and then dropping out of two Twenty20 matches for county side Sussex.

Robinson performed well on his England debut, taking seven wickets — including a haul of 4-75 — and making a useful 42 in a drawn series opener at Lord’s.

But the Twitter storm meant he was suspended from international duty and missed an eight-wicket defeat in the second and final Test against New Zealand at Edgbaston, a reverse that saw England lose their first Test series at home in seven years.

But he is now back in the squad for the opening two matches of a five-Test campaign against India at Trent Bridge (starting on August 4) and Lord’s (August 12).

“We have selected Ollie Robinson after his seven-wicket Test debut against New Zealand,” said head coach Chris Silverwood in an England and Wales Cricket Board statement.

“Ollie proved in that Test that he has the ability to replicate his outstanding form in the County Championship at international level and we will continue to work with him to develop his England career.”

Stokes hurried back from a finger injury to lead a makeshift one-day team in a series win against Pakistan after all the 16 England players originally selected were ruled out by a Covid-19 outbreak within the squad that meant they had to self-isolate.

But star all-rounder Stokes was rested from a subsequent 2-1 T20 series win over Pakistan.

Fast bowler Jofra Archer (elbow) and pace bowling all-rounder Chris Woakes (heel) have both been ruled out through injury.

Wicketkeeper-batsmen Jos Buttler and Jonny Bairstow, both controversially rested from the New Zealand series following their stints in the lucrative Indian Premier League, return after James Bracey struggled against the Black Caps.

Jack Leach and Dom Bess have been selected as the specialist spinners.

All England players will be available for the first two rounds of the Hundred, English domestic cricket’s new 100 balls per side competition, before linking up at Loughborough for a training camp ahead of the first Test.

Silverwood, predicting an “outstanding five Tests”, said: “We are expecting a highly competitive series and have selected our strongest possible squad.

“The returns of all-rounders Ben Stokes and Sam Curran provide balance that allows us to get back to a structure that has been successful in Test cricket.

“Ben’s leadership in the Royal London Series, when he played despite his finger not yet being 100 percent, typified his character and commitment that drives the players around him forward.”

The former England paceman added: “With Jos and Jonny back in the squad we have added further experience and quality that will be needed against the world’s second-ranked team.”