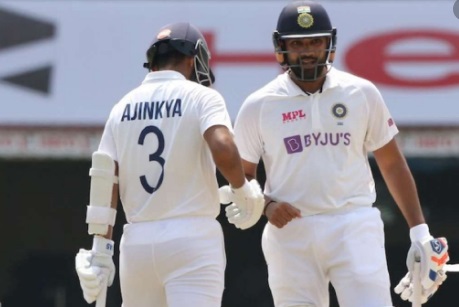 Rohit, who came into the Test on the back of a rough patch, brushed away all doubts with a supreme display against the English bowlers on a daunting pitch. In a terrific end to the day, England has fought back to knock off six wickets but not before the Indians have been placed on a high deck on a difficult dust-bowl track that has begun to turn sharply. Rohit Sharma’s stupendous 161 and Ajinkya Rahane’s calm 61 put India back on top after England blew away the Indian top-order, with the captain Kohli and opener Shubman Gill being dismissed for ducks.

After Virat Kohli had voiced his dissatisfaction with the pitch produced at Chepauk for the first Test against England, it was no surprise to see the ball turn and spit for the spinners on day one of the rematch. Kohli himself was done in by it, bowled for a fifth-ball duck by the returning Moeen Ali before lunch. But that was the high point of the day for Moeen and England, as Rohit and Ajinkya Rahane produced a bustling century partnership that threatened to be decisive even at such an early stage.

England claimed three early wickets – including one for Olly Stone with his third ball on only his second Test appearance – but were effectively shut out by Rohit and Rahane during the afternoon session, despite regular half-chances coming and going. Again Joe Root was left to rue a lack of control from his spinners: Jack Leach was the more consistent, asking questions throughout the day, while Moeen went at more than four an over, despite picking up the wickets of Kohli and Rahane.

A majestic innings in capricious conditions from India opener Rohit Sharma gave the hosts a strong platform at the outset of the second Chennai Test. Rohit counterattacked during a harum-scarum morning session and then settled in to grind England into the dry, cracked clay of the MA Chidambaram Stadium, converting his fourth Test hundred as an opener into a dominant 161.

England : Yet to bat