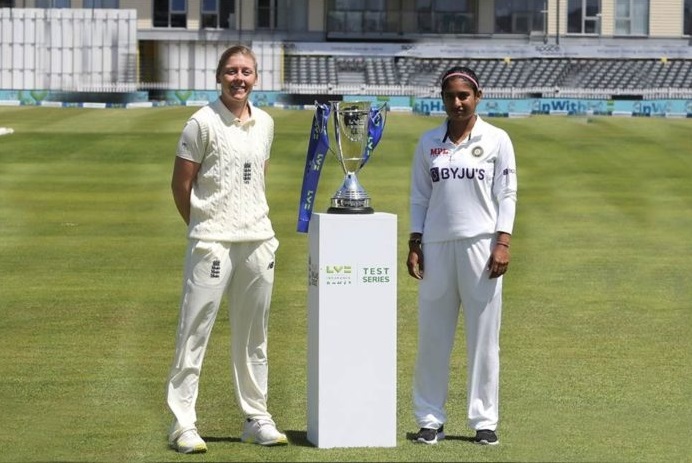 Shafali Verma, who made her Test debut, has smashed 96 runs while Smriti Mandhana also scored a half-century to give India a solid opening stand.

Earlier, England declared their innings on 396/9. It was England’s highest total against India Women and their sixth highest in all women’s Tests.
India Women 1st Innings 187/5 (60 ov)

England debutant Sophia Dunkley reminded not out on 74 as captain Heather Knight decide to declare the innings on 396/9 (121.2 ov). Three Englan batters score the fifties including Dunkley. Knight scored 95 of 175 while Tammy Beaumont scored 66 of 144 balls. For visitors, Sneh Rana picked a four-wicket haul while Deepti Sharma took three wickets. Pooja Vastrakar and Jhulan Goswami also claimed one wicket each.

India spinner Sneh Rana picked up three wickets of England batters to help her side pull back things after England Heather Knight and Tammy Beaumont scored fifties here at Bristol County Ground in the one-off test on Wednesday. England won the toss and opted to bat first in one of the Test. India medium pacer Pooja Vastrakar took her maiden Test wicket when she sent back England’s Lauren Winfield. It was also the maiden Test dismissal for Taniya Bhatia, who has been a livewire behind the wicket. Opening batsman Tammy Beaumont scored a fifty alongside captain Heather Knight to recover from the early loss.

Rana picked her maiden Test wicket as she took the wicket of batsman Beaumont. Knight along with Natalie Sciver stiched another partnership and took the host’s score past 200.  Spinner Deepti Sharma picked the wicket of Sciver when she was on 42 runs of 75 balls with the help of six boundaries. Knight completed her fifty to help her side get on top of India. Heather, who came to bat at number three, played a steady innings of 95 runs with the help of nine boundaries before falling against Deepti Sharma. Earlier, Rana removed England wicket-keeper batsman Amy Jones on one and Georgia Elwiss on five. Katherine Brunt and debutant Sophia Dunkley are at the crease for the hosts. For visitors, Rana picked three wickets while Sharma claimed two wickets. Vastrakar picked the first wicket of the day.

England captain Heather Knight won the toss and opted to bat first against India here at Bristol County Ground in the one-off test on Wednesday. India captain Mithali Raj revealed at the toss and Shafali Verma will make her Test debut in this game.

Deepti Sharma, Pooja Vastrakar and Taniya Bhatia are also making their debuts in the match

Hello & welcome from Bristol for the #ENGvIND Test!

England have won the toss & elected to bat against #TeamIndia.

Mithali Raj led Indian women’s team will play their first-ever Test match in last seven years against England on Wednesday. The match will be played at Bristol County Ground for the one-off test between the two sides on June 16, Wednesday. The captain in the virtual press conference made it clear that the playing XI will be decided on the day of the match as many Indian women are expected to make their debut.