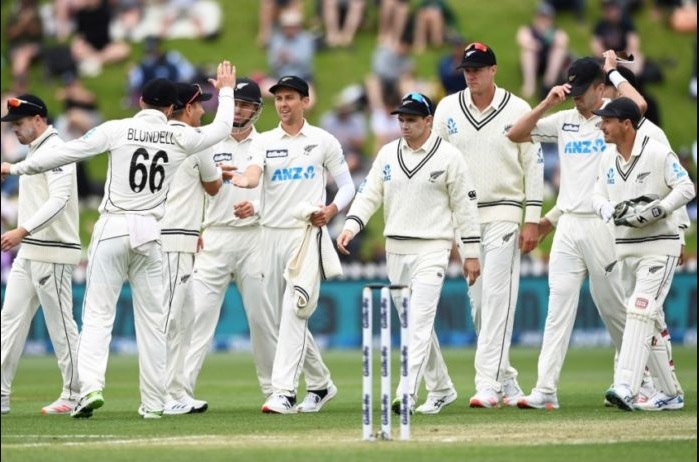 ENG vs NZ Live Score: ENG 54/1 (27.3 ov), New Zealand set 273 runs target to win, Follow live updates- New Zealand’s Neil Wagner sent back the last innings hero for England Rory Burns to pick the first wicket of the day for the visitors here at the Lord’s Cricket Ground on Sunday. Blackcaps need nine wickets while England are chasing 273 to win the first Test and take a 1-0 lead in the series. England is certainly not looking to win this game as they are going at a run rate of 1.93.

ENG vs NZ 1st Test Day 5 Live Score: With over 70 overs to go on Day 5 of the Lord’s Test New Zealand skipper, Kane Williamson decided to declare the innings. England now need 273 runs to win the Test and take the lead of 1-0 in the series.

England debutant Ollie Robinson picked three wickets as the rain stops the play on Day 5 of the second innings of the Lord’s Test against New Zealand on Sunday. On the other hand veteran batsman, Ross Taylor was playing counter-attacking innings to help visitors score quickly however he was removed by Mark Wood.

Rain washout the Day 3 of the Lord’s Test otherwise the game would have been perfectly poised for a thrilling finish on Day 5. However, all three results are possible on D-Day. As of now, it is most likely that the game will end in a draw but an aggressive captaincy decision by Kane Williamson will change the course of the game in no time. New Zealand is at the top with 165 for 2 in the second innings but they are not in the winning position. On the other hand, England need to first take the remaining 8 wickets and then chase down whatever is the target.

Kiwi speedster Tim Southee scalped six wickets in the first innings while Rory Burns registered a ton for England as New Zealand extended their lead to 165 runs on Day 4 of the ongoing first Test at the Lord’s Cricket Ground on Saturday.

At stumps on Day Four, NZ’s second innings score read 62/2 and the visitors have extended their lead to 165 runs. For the Kiwis, Tom Latham (30*) and Neil Wagner (2*) are unbeaten at the crease.

Arriving for Day 5 at the @HomeOfCricket. Follow play LIVE in NZ with @sparknzsport from 10pm NZT. A 165 run lead to start. Scorecard | https://t.co/4Q5VH4Ha8e #ENGvNZ pic.twitter.com/NW0ynk7NRt

ENG vs NZ 1st Test Day 4: After gaining a lead of 103 runs, New Zealand openers Latham and Devon Conway saw out the new ball. While the run-scoring was slow, both players kept the England bowlers at bay.

The openers put on 39 runs for the first wicketand England finally got the breakthrough in the 19th over of the second innings as Ollie Robinson clean bowled Conway (23). Skipper Kane Williamson (1) failed to leave the mark with the bat as he was adjudged leg-before wicket on a ball bowled by Robinson.

ENG vs NZ 1st Test Day 5 LIVE How do I watch live streaming of England vs New Zealand 1st Test?