Either you are in, or you are out: FIFA’s Infantino warns Super League clubs. 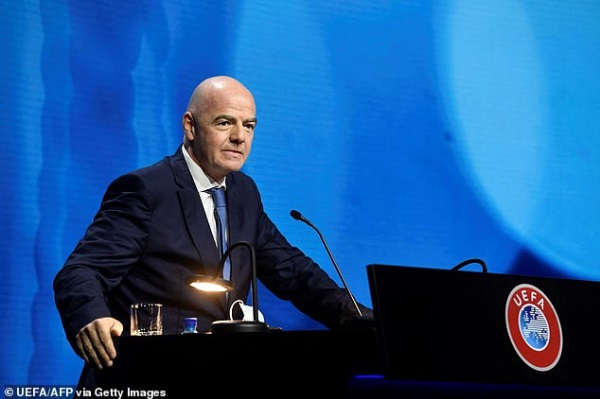 FIFA President Gianni Infantino told the 12 breakaway European Super League clubs on Tuesday that they could not be “half in, half out” of the established football system and must face up to the reality of their decision.

Real Madrid, Barcelona, Manchester United, Liverpool, and Juventus are among the members of the proposed new league, but UEFA has threatened to ban them from domestic and international competition and vowed to fight the move.

“If some elect to go their own way then they must live with the consequences of their choice, they are responsible for their choice – concretely this means, either you are in, or you are out. You cannot be half in and half out. This has to be absolutely clear,” Infantino told UEFA’s congress in Montreux, Switzerland.

Infantino’s comments came after the Super League had called on Monday for talks with UEFA and FIFA about their new competition’s place in the football “ecosystem”.

The FIFA head, a former UEFA general secretary, repeated his opposition to the breakaway project.”We can only and strongly disapprove of a Super League which is a closed shop, a breakaway from current institutions,” Infantino said. “No doubt whatsoever of FIFA’s disapproval. Full support to UEFA.

UEFA president Aleksander Ceferin on Tuesday told the English Premier League’s “Big Six” clubs who have joined a breakaway European Super League that they had made a “huge mistake”, and urged them to think again.

Speaking at UEFA’s congress, the Slovenian criticized the attitude of owners who he said view the game as a “product” and fans as “consumers” but then spoke directly to the Premier League rebels.

“I would like to address the owners of some English clubs. Gentlemen, you made a huge mistake. Some will say it is greed, others disdain, arrogance or complete ignorance of England’s football culture, but actually it doesn’t matter,” he said.

“What matters is that there is still time to change your mind, everyone makes mistakes, English fans deserve to have you correct your mistake, they deserve respect”.

Manchester United, Liverpool, Manchester City, Tottenham Hotspur, Chelsea, and Arsenal have signed up to the 12-team Super League along with top Spanish and Italian clubs.