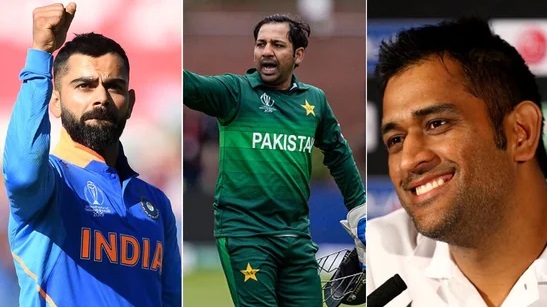 It wasn’t too long ago that Faf du Plessis was on a run-scoring spree for the Chennai Super Kings in the IPL 2021. With 320 runs from seven matches, du Plessis had peeled off four consecutive half-centuries for CSK before the tournament came to halt. Now, as du Plessis gets ready to play in the Pakistan Super League, his team Quetta Gladiators would be hoping the former South Africa captain to bat in the same groove as he did in the IPL.

From playing under MS Dhoni in the IPL, du Plessis will now be playing in the leadership of former Pakistan skipper Sarfaraz Ahmed. Ahead of the resumption of the sixth season of the PSL from June 9, du Plessis sat down for an interview with Cricket Pakistan where he compared the captaincy styles of Sarfaraz, Dhoni and the current India and Royal Challengers Bangalore captain Virat Kohli.

“Quite different… MS is quiet and reserved, does most of his things instinctively on the field. Sarfaraz is the opposite… almost like Virat. Always talking to the players, always to the bowlers, always very passionate about how he captains his team, and he shows it. So, there is no right and wrong way. These are just two different styles,” du Plessis said.

Du Plessis had a reasonable record as captain himself. He led South Africa in 36 Tests, winning 18 and losing 15. In the 76 matches (T20Is and ODIs combined) under du Plessis, South Africa won 51 and lost 23 games. At Quetta Gladiators, even though Sarfaraz will be leading the team, du Plessis is more than happy to give his inputs if and when needed.

“He’s obviously been captain of Pakistan and has got the best out of players. I’ve always enjoyed playing under different leaders just to see how they go about their business because I also am pretty passionate about leadership myself so it’s nice for me to be able to see how he does things and offer my inputs if he wants to take it,” added du Plessis.

Dinesh Karthik Reveals Pat Cummins “Himself Said That He Will Not Come” For IPL 2021 In UAE
IPL 2021 Phase 2: BCCI to make big changes in IPL 2021 Schedule, last phase to be played at one venue