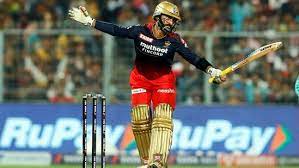 Dinesh Karthik has been reprimanded for breaching the IPL code of conduct during the contest between Royal Challengers Bangalore and Lucknow Super Giants on Wednesday at Eden Gardens, Kolkata.

A communique from BCCI stated: “Karthik admitted to a Level 1 offence under Article 2.3 of the code of conduct and accepted the sanction.”

Article 2.3 pertains to use of an audible obscenity during a match. “Article 2.3 covers the use of words commonly known and understood to be offensive, obscene and/or profane (in any language) and which can be heard by the spectators and/or the viewing public whether by way of the stump-microphone or otherwise. This conduct may include, for example, swearing in frustration at one’s own play or fortune,” the code of conduct states.