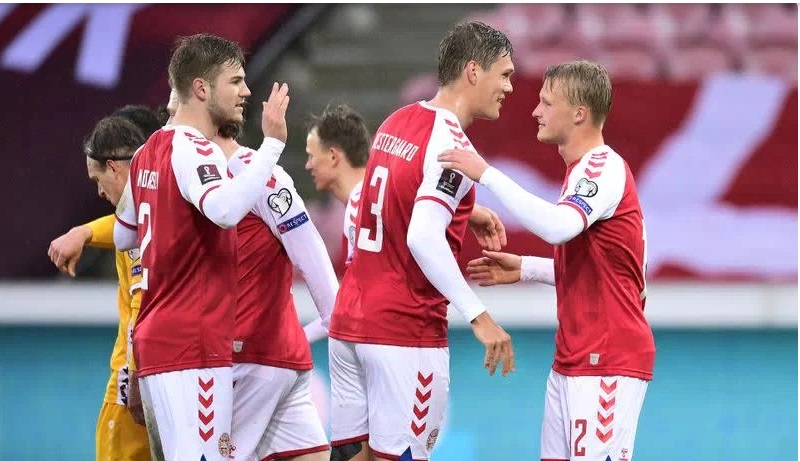 Only goalkeeper Kasper Schmeichel was retained from the lineup that started a 2-0 win at Israel in this congested, triple-header week for European national teams to begin qualification for the 2022 tournament in Qatar.

The Danish players became the latest European team to show their feelings about Qatar and human rights issues by wearing red T-shirts with the slogan “Football supports change” for the pre-game photo.

The Danish soccer federation said it would auction the signed shirts to raise money for Amnesty International projects that help migrant workers in Qatar.

Playmaker Christian Eriksen was among those rested — ahead of a tougher game in Austria — and came off the bench only when his teammates were six goals ahead.

“A national team is not 11 players — it’s a squad. I’m very pleased that we proved that today,” coach Kasper Hjulmand said.

Denmark leads Group F as the only one of six teams to start with two wins. The game in Vienna on Wednesday already looks key to getting the only guaranteed ticket to Qatar for the group winner in November. The runner-up enters playoffs in March 2022.

Austria overcame an early setback at home to the Faroe Islands to win 3-1 with all the goals coming in the first half.

Scotland is losing ground as a 1-1 draw in Israel followed dropping points at home in a 2-2 draw with Austria on Thursday.

Several thousand fans inside Bloomfield Stadium in Tel Aviv saw Dor Peretz score with a long-range shot to give Israel the lead just before halftime and Ryan Fraser level in the 56th.

Denmark is top-seeded in the group and started ranked No. 12 in FIFA’s world rankings ahead of Germany. It is also the only team in Group F to play at a World Cup in the past 20 years.

Its biggest-ever win in a World Cup or European Championship qualifying game showed the depth available to Hjulmand, who will lead the team into the delayed Euro 2020 in June as one of the host nations.

An 8-0 the loss was a record for Moldova, whose federation was founded in 1990 and joined FIFA four years later.

Moldova hosts Israel next and Scotland returns to Glasgow to play the Faroes.