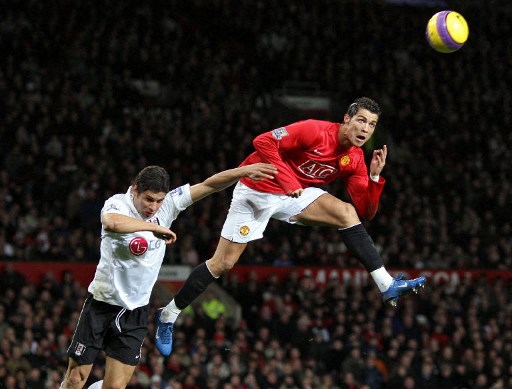 Ronaldo was caught winking on camera as his United teammate Wayne Rooney was sent off for England at the World Cup, making the winger a hate figure across England. Instead of wilting under pressure he took the ascendency from Rooney at the heart of United, ending the season as player of the year and scoring the winning goal at Manchester City as United won the 2007 Premier League.

Ronaldo produced one of his first true world class performances at Old Trafford in a 7-1 Champions League quarter-final win over Roma. His snapshot opener and far-post tap in were in fact less impressive than his overall performance dominated the game.

With Ronaldo’s repertoire expanding, he added a new string to his bow with gravity defying high leaps to head goals home. One of the early examples was his opener for United in their Champions League final against Chelsea when he soared above the defence to bang home a Paul Scholes cross. The match eventually went to penalties and Ronaldo failed to convert from the spot when stepping up first. He threw himself to the ground sobbing in relief when Nicolas Anelka’s spot kick was also saved as United emerged narrow winners in Moscow, despite his miss.

In December, Ronaldo became the first United player to win the Ballon d’Or as the best player in Europe since George Best a full 40 years earlier. His final season, however, was over-shadowed by a lurking Real Madrid and ankle injuries. But in Porto, Ronaldo scored a 35-metre wonder-strike in a Champions League quarter-final that won United the match and him the Puskas award for best European goal of the season. Ronaldo himself said it was the best goal he had ever scored.