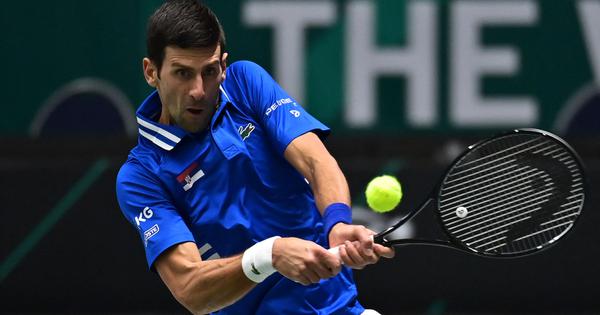 Djokovic took an hour to beat Novak 6-3, 6-2 after Dusan Lajovic saw off Gerald Melzer 7-6, 3-6, 7-5 behind closed doors due to a resurgence of the coronavirus in Austria.

Djokovic is attempting to end an already memorable year on a high after claiming three of the season’s four Grand Slams.

“I love to play for my country, when they need me, I’m here,” Djokovic said after his match.

Backed by a hearty home crowd Italy raced into a 2-0 lead over the States thanks to wins from Lorenzo Sonego and Jannik Sinner.

Sonego, the world No.27, was ecstatic.

In the doubles rubber Rajeev Ram and Jack Sock struck back for the States in a 7-6 (7/5), 6-2 win over Simone Bolleli and Fabio Fognini to make it 2-1, while Colombia are the third team in Group E.

The 40-year-old Feliciano López opened Spain’s title defence  with a 6-3, 6-3 win over Roberto Quiroz of Ecuador.

“It’ a gift to be back here playing the singles rubbers, I never expected it, I was supposed to play in the doubles but after everything that happened this week here I am.”

“I think I did okay,” he said, referring to the absence of Carlos Alcaraz, who went into quarantine on Thursday after testing positive for COVID-19 .

On the opening day of the revamped 2021 finals brothers Elias and Mikael Ymer helped Sweden sweep aside Canada, France fought back to down the Czech Republic and Croatia crushed Australia.

The Davis Cup, which began life back in 1900 as a bilateral contest between Britain and the United States, was cancelled in 2020 due to the pandemic.

These are joined by two wild card nations France and Serbia.

These 18 nations are divided into six groups of three, with winners and the top pair of second places going into the quarter-finals pot.

The semi-finals and December 5 final will all be played in the Spanish capital, reward for the team that won the title two years ago after 2020 was cancelled due to the COVID-19 pandemic.