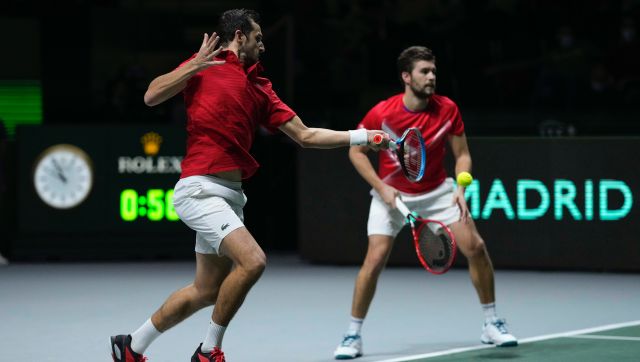 Madrid: Daniil Medvedev sealed Russia’s place in the Davis Cup final with a 6-4, 6-4 victory over Jan-Lennard Struff giving his team an unassailable 2-0 lead over Germany on Saturday.

The world number two backed up Andrey Rublev’s 6-4, 6-0 win over Dominik Koepfer in the first rubber to set up a clash with Croatia on Sunday.

The Russians, like the Croats, will be bidding for a third win in the competition.

“Russia is without doubt the strongest team in this Davis Cup,” said Croatia’s veteran number one Marin Cilic.

“It will be a very tough mission for us facing them. But we have our own strengths.

“It is our third final in five years, which is something exceptional, and does not happen very often,” added the 33-year-old 2014 US Open champion.

The Croats’ task is certainly a formidable one.

The Russians strength in depth is unquestionable with four players all ranked in the top 30 (Rublev is fifth, Aslan Karatzev is 18th and Karen Khachanov 29th).

They have lost just one rubber in the whole tournament, Rublev going down to Spanish veteran Feliciano Lopez in their first match.

Croatia are hoping to win one of their singles and leave it down to their unbeaten world number one doubles pairing of Mate Pavic and Nikola Mektic.

The Wimbledon and Olympic champions have yet to drop their service in the competition.

“They have the best doubles pair in the world, thus we will have to try and wrap this up in the singles,” said Medvedev.

This the Russians did clinically against the Germans — admittedly without their number one Alexander Zverev who opted to miss the finals.

Rublev ruthlessly exposed the gap between himself and the 54th-ranked Koepfer.

“I was focused from the beginning to the end,” said 24-year-old Rublev, who eased to victory in 50 minutes, with Medvedev needing just 17 more to beat Struff.

Germany later claimed a consolation win in the doubles with Kevin Krawietz and Tim Puetz seeing off Aslan Karatsev and Karen Khachanov 4-6, 6-3, 6-4.

Once that was done and dusted their venerable non-playing captain Shamil Tarpsichev could enjoy a cake baked to honour his 100th match in charge with almost 45 years in his role.

The organisers were denied the mouthwatering prospect of Medvedev potentially facing world number one Novak Djokovic as the Croats ousted Serbia 2-1 in the other semi-final on Friday.