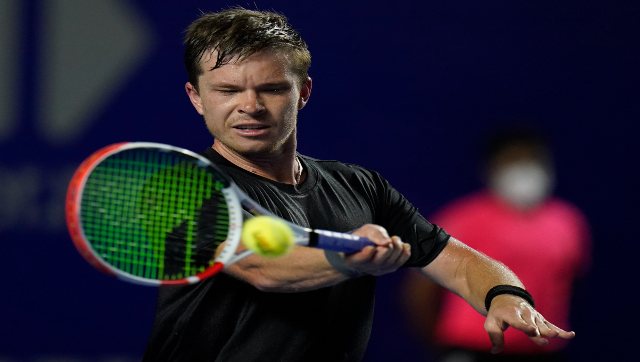 Paris: Teenager Carlos Alcaraz made a stunning start to his Davis Cup career on Friday, helping six-time champions Spain to a comfortable 2-0 lead over Romania on the first day of their qualifying tie.

The 18-year-old Alcaraz, ranked 19 in the world, swept past experienced Marius Copil 6-4, 6-3 on the clay courts of Marbella.

“I was nervous, but no more than usual. Having an experience like this in the Davis Cup helps you grow as a player and as a person,” said Alcaraz widely seen as Spain’s heir apparent to Rafael Nadal who has skipped this tie.

“I try not to put the pressure on myself of being the future of Spanish tennis, world number one or the best player, as many people tell me. I don’t give it any more importance than it has and I follow the path that the team and I have set for ourselves.”

In the first rubber, Roberto Bautista Agut, ranked 15, was equally untroubled, cruising to a 6-3, 6-1 win over Gabi Adrian Boitan, who was shown up by his modest 721 ranking.

France, the 10-time Davis Cup champions, also opened up a 2-0 lead over Ecuador in Pau.

Canada, without ninth-ranked Felix Auger-Aliassime and world number 13 Denis Shapovalov, slipped to a 2-0 deficit against the Netherlands in The Hague.

Twelve Davis Cup ties are being contested on Friday and Saturday, with the winners progressing to the finals, the first stage of which will be played in September with 16 teams.

Croatia, Great Britain and Serbia are already through, with Davis Cup chiefs to decide next week who will replace defending champions Russia after they were axed over the invasion of Ukraine.

Alex de Minaur got 28-time champions Australia off to a blistering start in Syndey, but Thanasi Kokkinakis couldn’t maintain the momentum as they split their opening singles rubbers with Hungary.

Almost seven years since he last played Davis Cup, Kokkinakis was recalled after claiming a first ATP singles title in Adelaide in January then winning the Australian Open doubles crown with Nick Kyrgios.

Alexander Zverev, who reversed his decision not to play Davis Cup, gave Germany a 1-0 lead over Brazil in Rio with a 6-4, 6-2 victory over Thiago Seyboth Wild.

World number three Zverev is playing for the first time since his disqualification from the Acapulco ATP event last month for smashing his racquet against the umpire’s chair.

Filip Horansky was an unlikely star for Slovakia against Italy in Bratislava.

The 20rd-ranked Horanksy was drafted in at the last minute when Alex Molcan tested positive for Covid-19 but he stunned world number 21 Lorenzo Sonego 7-6 (7/2), 6-3 to register his first career singles win in the Davis Cup.

“The Davis Cup is different,” said 21-year-old Baez, making his debut. “The butterflies you get in your stomach are not the same as in other tournaments”.

In Reno, Nevada, 32-time champions the United States eased into a 2-0 lead over Colombia.

Taylor Fritz then overwhelmed Alejandro Gonzalez 6-1, 6-0 to leave the hosts in control of the match.

The doubles and reverse singles in all the ties are played on Saturday.