Daniil Medvedev roared into the third round of the Miami Open. 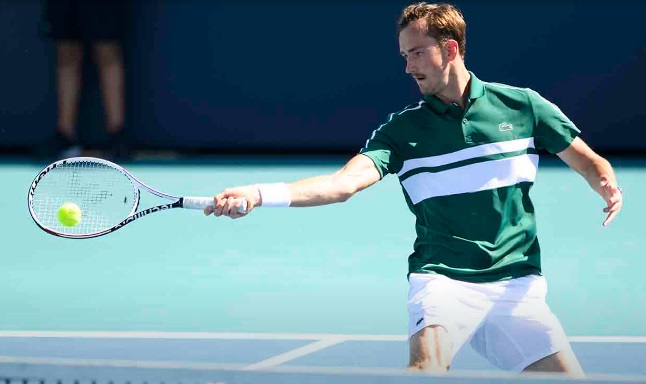 Top-seeded Daniil Medvedev roared into the third round of the Miami Open on Friday, downing Taiwanese veteran Lu Yen-Hsun 6-2, 6-2 in just 56 minutes.

The 25-year-old Russian fired nine aces with just one double fault as he advanced to a third-round meeting with Australian Alexei Popyrin, a 6-4, 6-2 winner over 30th-seeded American Reilly Opelka.

Runner-up to world number one Novak Djokovic at the Australian Open, he reached a career-high No. 2 in the world rankings this month when he lifted the ATP trophy at Marseille.

Medvedev became the first player outside the “Big Four” of Djokovic, Roger Federer, Rafael Nadal, and Andy Murray to rank second in the world since Lleyton Hewitt in 2005.

He said the hot, humid weather in Miami made for a welcome change, and after a first-round bye he was able to ease himself in against Lu, a 37-year-old who is playing on a protected ranking after the latest in a long litany of injuries sidelined him for most of the pandemic-disrupted 2020 season.

“Managed to win quite easy and I think in these conditions it’s important if you want to go far,” Medvedev said. “It’s different — outdoor, hotter conditions, different balls, everything is different.

“I came here last Saturday so I had a lot of days to prepare. I like to play in these humid hot conditions, so I’m looking forward to the next round.”

Top-ranked Barty Overcomes Match Point For Win at Miami Open.
Miami open :Osaka acknowledged she was feeling some nerves in her first match since she lifted her fourth Grand Slam title in Melbourne