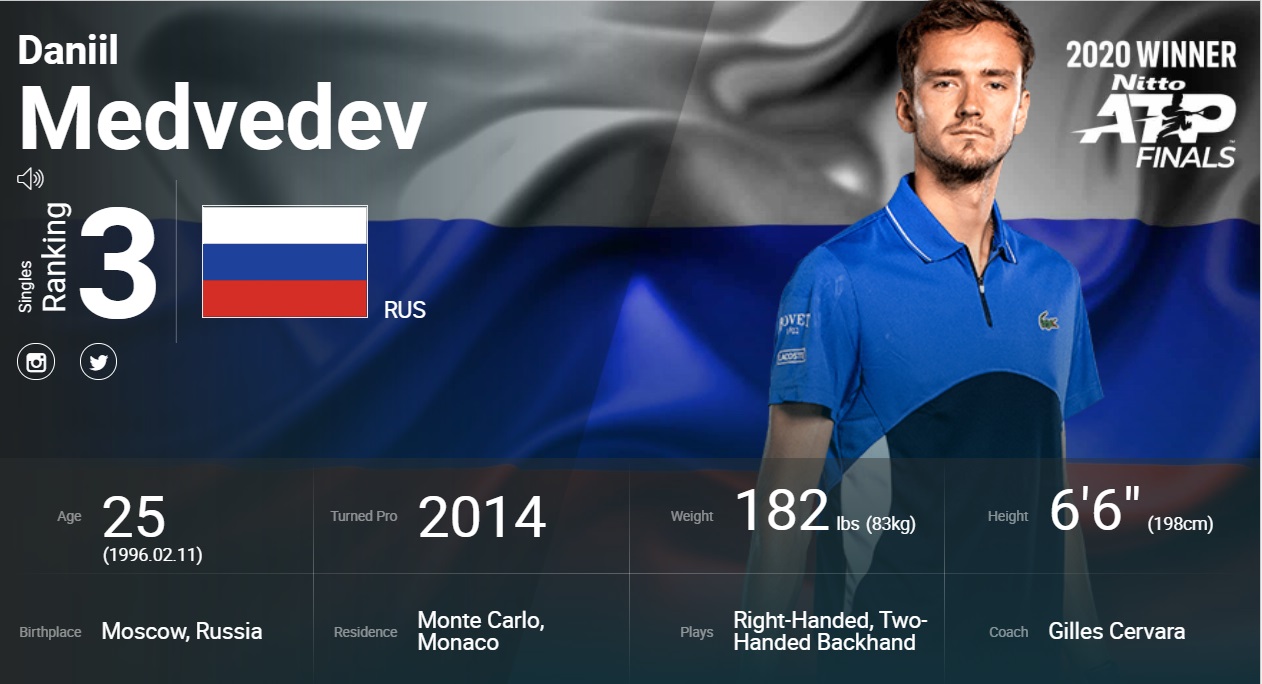 Soaking in a torrent of boos and catcalls and the odd string of applause, Daniil Medvedev folded his hands into his hips and looked around at the jeering faces dotting the stands of the Rod Laver Arena. This is how he made his entry into his first Australian Open final–not with a fist to the air or hands to the face or knees to the court, as others tend to do when they foray into a Grand Slam singles final. Medvedev simply stood at the net, free of emotions except for a half-smirk, half-scowl, waiting for the vanquished, Stefanos Tsitsipas, to meet him in the eye.

Daniil Sergeyevich Medvedev is a Russian professional tennis player. His career-high singles ranking by the Association of Tennis Professionals (ATP) is world No. 3, which he first achieved in February 2021. He has won nine ATP Tour singles titles, including the 2020 ATP Finals where he defeated Novak Djokovic, Rafael Nadal, and Dominic Thiem. With the win, Medvedev became the first player to defeat the top 3 ranked players in the world. Medvedev was also the runner-up at the 2019 US Open and the 2021 Australian Open, where he lost to Nadal and Djokovic, respectively.

Personal life : Medvedev studied applied economics and commerce at the Moscow State Institute of International Relations, but dropped out to focus on tennis; he then switched to the Russian State University of Physical Education, Sport, Youth, and Tourism, where he received his diploma as coach. He has two older sisters named Julia and Elena.[5][6] His father encouraged him to take tennis seriously at the age of six.[7]

Nickname is Bear because his last name originates from Russian word “medved,” which means bear.
> No relation to former World No. 4 Andrei Medvedev.
> Speaks Russian, English and French.
> Father, Sergey; mother, Olga; sister, Elena.
> Parents wanted him to take up swimming at age 9, but when he arrived at the pool, he saw an announcement for tennis classes.
> Inspired when he watched countryman Marat Safin win 2005 Australian Open title.
> Favourite surface is grass and shot is return.
> Dream opponent is Pete Sampras.
> Enjoys reading as well as playing chess and PlayStation.
> Competed in national competitions for video games.
> Fan of FC Bayern Munich and football players David Alaba, Robert Lewandowski and former striker Mario Gomez.
> Would choose Quentin Tarantino to play him in a film about his life.
> Went to school at Physics and Mathematics Lyceum, finishing his final 2 grades in 1 year.
> Wife, Daria (married in September 2018).

ATP rankings as of February 22: