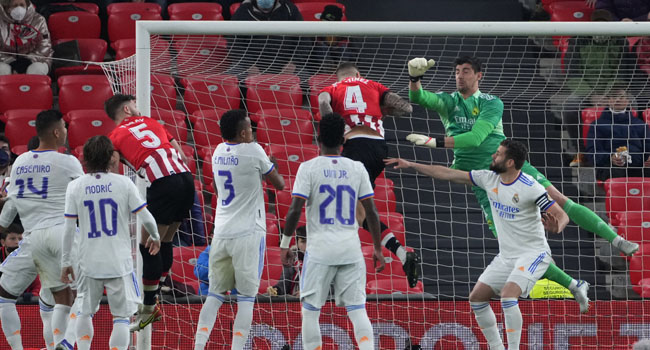 Madrid: Real Madrid’s hopes of clinching a Spanish domestic double were dashed on Thursday as Athletic Bilbao scored a dramatic 89th-minute winner to knock them out of the Copa del Rey.

Alex Berenguer’s scintillating strike after a Casemiro mistake was enough to seal a shock 1-0 victory at San Mames and send Athletic through to the semi-finals.

With Barcelona, Atletico Madrid and Sevilla already out, Madrid were firm favourites to win the Copa del Rey while in LaLiga, they are in the driving seat too, sitting four points ahead of Sevilla at the top of the table.

But it will be Athletic that join Real Betis, Valencia and Rayo Vallecano in the last four and while Betis are flying high in the league, all four teams will have genuine hopes now of lifting the trophy.

For Athletic, it would be particularly special, coming after they were beaten in two finals in two weeks last year, the first a postponed game from 2020 against Basque rivals Real Sociedad, and the second at the hands of Barcelona.

They defeated a Real Madrid team that was almost at full-strength and certainly the best Carlo Ancelotti had at his disposal, even if the visitors dearly missed Karim Benzema, who is still recovering from injury.

Without Benzema, Madrid lacked any real threat up front and it was a daunting reminder for Ancelotti of his lack of quality options to back up the Frenchman when he needs them.

Neither Eden Hazard nor Gareth Bale were given even a minute in a competition that usually affords fringe players an opportunity.

“We are hurting because we want to win all the competitions,” said Ancelotti.

“We are out and we have two other competitions left and we believe this defeat will not have consequences. This defeat makes us stronger.”

The match was intense and compelling but low on chances, with neither team able to carve out any golden opportunities, even if Athletic were the more aggressive overall.

When the decisive moment came, it came from a mistake as Casemiro’s sloppy pass was cut out by Mikel Vesga, who quickly fed into Berenguer.

He still had work to do but made the space with a sharp turn away from Nacho Fernandez, before burying a superb shot past Thibaut Courtois and into the far corner.

There was no such drama for Real Betis, who cruised through after thrashing Real Sociedad 4-0 to continue their superb season under Manuel Pellegrini.

Betis sit third in LaLiga, with hopes of qualifying for next season’s Champions League, and on this form they will take some stopping in the cup. They have not reached the Copa del Rey final since they last won the competition in 2005.

Juanmi, who joined Betis from Real Sociedad in 2019, scored twice against his former club but his opener owed much to some brilliant work by William Carvalho, who burst through and then cut back for his teammate to slot into the corner.

Adnan Januzaj had an equaliser for La Real ruled out before half-time and shortly after it, Juanmi struck again, firing in with his left foot after Alex Moreno raced onto an excellent pass from Sergio Canales.

Betis made it more emphatic in the last seven minutes as Willian Jose converted a penalty and then Aitor Rubial, on off the bench, sprinted clear and smashed in to make it four.