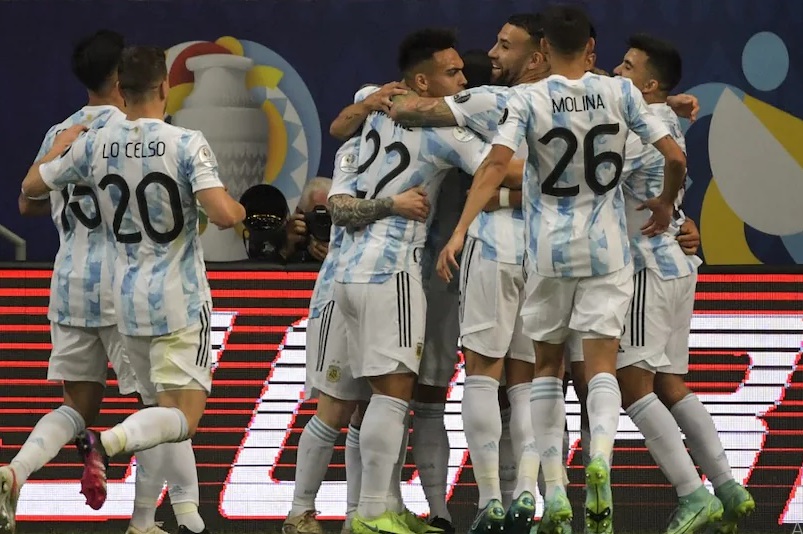 Guido Rodriguez scored the only goal of the game as Argentina edged past fierce local rivals Uruguay in a disappointing Copa America clash on Friday. The victory sent Argentina joint top of Group A with Chile on four points while Uruguay remain pointless. These two sides played the first ever international match outside the United Kingdom and have played each other more times than any other local rivals. They’ve won the Copa 29 times between them but familiarity can breed caution and for much of the encounter they canceled each other out.

Six-time Balon d’Or winner Lionel Messi had the first real chance, cutting in from the right onto his favored left foot to force a full stretch save from goalkeeper Fernando Muslera, who was relieved to see Lautaro Martinez unable to turn in the rebound.

Moments later, Cristian Romero rose highest in the area to meet a Rodrigo De Paul cross but Muslera made a comfortable save.

The pressure was relentless in the early stages and Argentina took a deserved lead on 13 minutes as Messi got to the byline and stood up a cross to the back post where Rodriguez rose above his marker to head home off the far post.

Uruguay gradually stemmed the tide and started to get a foothold in the game, only to see Argentina counter at pace before Muslera parried a fierce Nahuel Molina drive at his near post.

Despite enjoying the lion’s share of possession, Uruguay were unable to test Argentina goalkeeper Emiliano Martinez.

A slew of early substitutions in the second half disrupted the flow of the game and chances were at a premium.Despite boasting Luis Suarez and Edinson Cavani up front, Uruguay struggled to create any chances of note.

When Matias Vina put in a devil of a ball across the six yard box, neither Suarez nor Cavani could get a touch to turn the ball in.

Soon afterwards, Suarez went for the spectacular with a leaping bicycle kick but sent the ball high over the bar.Up the other end, Messi fired a free-kick from 20 yards straight into the wall as the game petered out into a scrappy affair.

The 22-year-old Blackburn forward was born in Stoke-on-Trent to an English father and Chilean mother, and only made his national team debut on Monday when he came off the bench in Chile’s 1-1 draw with Argentina.

But Brereton, who has played his entire career in the English Championship, was in the right place at the right time to finish off a rapier counter-attack and hand Chile victory.

Chile dominated the first period and could easily have gone in at half-time with a larger lead.

The goal came after Bolivia were caught out by a lightning counter-attack on 10 minutes, with Eduardo Vargas squaring to Brereton, who calmly took one touch to beat a sliding defender and then slotted home with his second.

Soon after, Meneses lashed a shot just past the post and veteran captain Arturo Vidal put a header straight at Lampe.

Bolivia were under the cosh for much of the first half but still came close themselves through Roberto Fernandez, Erwin Saavedra and Ramiro Vaca.

Lampe, though, had to make seven saves before halftime to keep his team in the tie.

Bolivia made a good start to the second half and Chile goalkeeper Claudio Bravo was forced into a sprawling save to deny Saavedra.

The Bolivians created the better second half chances and were unlucky when a shot from substitute Danny Bejarano took a huge deflection before sailing just past the post. But it wasn’t enough to earn their first point of the tournament.