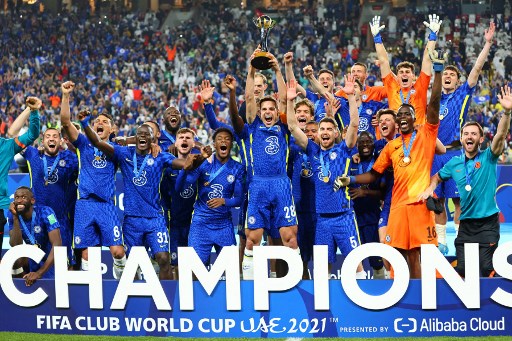 Romelu Lukaku’s superb header gave the European champions the lead on 54 minutes but Raphael Veiga levelled from the spot for the Copa Libertadores winners just past the hour in Abu Dhabi.

Havertz, the hero in the Champions League final against Manchester City, was Chelsea’s match-winner again as he converted a penalty on 117 minutes awarded following a VAR review.

“It’s amazing. After champions of Europe, we are now champions of the world. It sounds better,” Havertz told Channel 4.

“I was nervous (taking the penalty), I have to be honest. It’s a big penalty. It’s just crazy. It was good I kept the nerves. I am very happy.”

“I dreamed always as a kid of this. This is an amazing feeling for me,” he added.

Chelsea have now claimed every possible trophy since Roman Abramovich bought the club in 2003, and become the third English side to win the global tournament after Manchester United and Liverpool.

The Blues avenged their 1-0 loss to Corinthians in the 2012 final, but will have little time to celebrate with a critical stretch on the horizon once they return to London.

They face Lille in the Champions League last 16 either side of the League Cup final against Liverpool and FA Cup fifth round, playing in four different competitions in 12 days.

Chelsea coach Thomas Tuchel was back in the dugout having flown out to Abu Dhabi on Friday after missing the past two games following a positive test for Covid-19.

Edouard Mendy returned in goal in the wake of Senegal’s Africa Cup of Nations victory, at the expense of Kepa Arrizabalaga, whose much improved form is likely to attract interest from other clubs in the summer.

Chelsea’s decline in the Premier League has coincided with lack of authority and conviction, and despite controlling possession it wasn’t until the end of the first half they forced Weverton into a save.

Even then, Thiago Silva’s searing drive from distance appeared to be going wide.

In contrast, Palmeiras were twice left to rue their lack of efficiency as Dudu stabbed well wide before Andreas Christensen made a key intervention to negate a promising attack for the Brazilians.

Lukaku rises to the occasion

Lukaku has struggled to meet expectations after rejoining Chelsea from Inter Milan as the club’s record signing, but the Belgian made it two goals in as many games here early in the second half.

Callum Hudson-Odoi, given the nod at left wing-back, whipped in a cross and Lukaku soared above two defenders to power beyond Weverton.

Christian Pulisic, brought on 30 minutes in for the injured Mason Mount, curled just wide after tidy interplay with Lukaku, but Chelsea gave Palmeiras a way back in when Silva handled in the area.

Australian referee Chris Beath was recommended to review the incident on the touchline monitor as Palmeiras players and coach Abel Ferreira appealed, and he almost immediately pointed to the spot.

Veiga, on target in the 2-0 win over Al Ahly, held his nerve to slam the penalty beyond Mendy, greeted with bellowing roars from many of the near-capacity 32,871 in attendance — the majority wearing the green and white of Palmeiras.

Pulisic again rolled an effort narrowly wide from an inviting lay-off and extra time came as little surprise, Chelsea forced to play an extra 30 minutes for the second time in a week.

A frantic scramble inside the six-yard box saw Pulisic bundle against the bar, although an offside in the build-up would have ruled out any goal.

Timo Werner curled over as time ticked away and Palmeiras defended deep, but Chelsea got the late breakthrough when Luan was penalised for blocking Cesar Azpilicueta’s volley with his arm.

Havertz sent Weverton the wrong way to spark wild celebrations, and a bitter night for Palmeiras culminated in them finishing with 10 men after Luan was sent off for scything down the German.