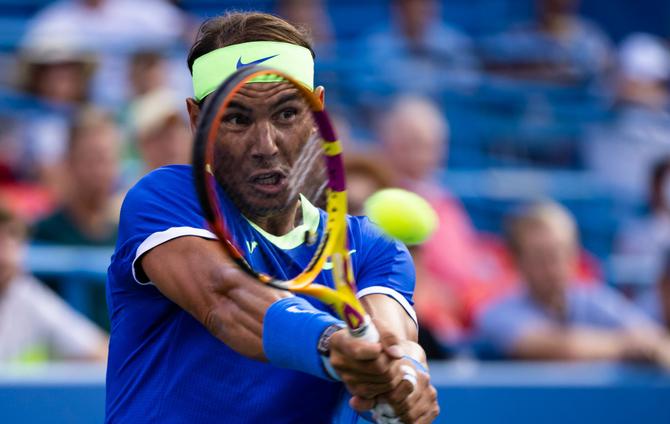 Washington: Rafael Nadal crashed out of his ATP comeback event after a two-month layoff on Thursday, but said his injured foot is improved and that keeps him believing “important things are possible.”

Nadal aggravated a foot injury in a three-set victory on Wednesday over American Jack Sock on the Washington hardcourts in his first match since losing a French Open semi-final to Novak Djokovic.

“Best news, the foot was better,” Nadal said. “I was able to move a bit better, so that’s very important, especially for me personally, to keep enjoying the sport and keep having energy, believing that important things are possible.”

The most important thing on Nadal’s upcoming schedule is the US Open, which begins on 30 August.

Djokovic, Nadal and Roger Federer all enter the US Open with a men’s record 20 career Slam titles, with Djokovic trying to complete the first men’s calendar-year Grand Slam since Rod Laver in 1969.

“I need to keep improving,” Nadal said. “I had a lot of problems with my foot. I was not able to practice all the days that I really wanted, but I did as much as I could.

“And I tried hard here. I try very hard. But was not enough. I’m going to keep trying to practice the proper way and to give myself a chance to be better soon.”

Nadal did not pick up a racquet for 20 days because of his sore foot, skipping Wimbledon and the Olympics.

“For me is just keep going, accept the challenge that I need to keep working and I have probably another chance next week in Toronto,” Nadal said. “Going to keep trying my best.

“The most positive thing is my foot was better than yesterday, so that’s the best news possible.”

Harris, ranked a career-high 50th, called it the greatest victory of his career. His 2021 wins include one at Dubai over fourth-ranked Dominic Thiem, the reigning US Open champion.

“I’m just super happy with how everything turned out.”

Harris was the first player to beat Nadal in their initial meeting since Denis Shapovalov at Montreal in 2017.

“I lost to Lloyd in Dubai this year, so not my favorite opponent,” said Nishikori. “But we’ll see.”

Nadal netted a forehand to surrender a break in the seventh game and Harris served out to take the first set, but the Spaniard dominated the second set, breaking in the fourth and sixth games to force a third set.

Harris, 24, saved two break points in the first game of the final set, the second on his 10th ace, and both held until his winner on match point.

In a match of 20-year-olds, Canadian second seed Felix Auger-Aliassime, ranked a career-high 15th, fell to US wildcard Jenson Brooksby 6-3, 6-4.

Brooksby, ranked 130th, was runner-up last month at Newport but had never beaten a top-90 opponent.

“I’ll have to see what I could have done in certain areas,” the Canadian said. “I fought with what I had, but overall he played a better match.”

Millman advances, de Minaur crashes in DC
Roger Federer pulls out of Toronto and Cincinnati to raise US Open doubts