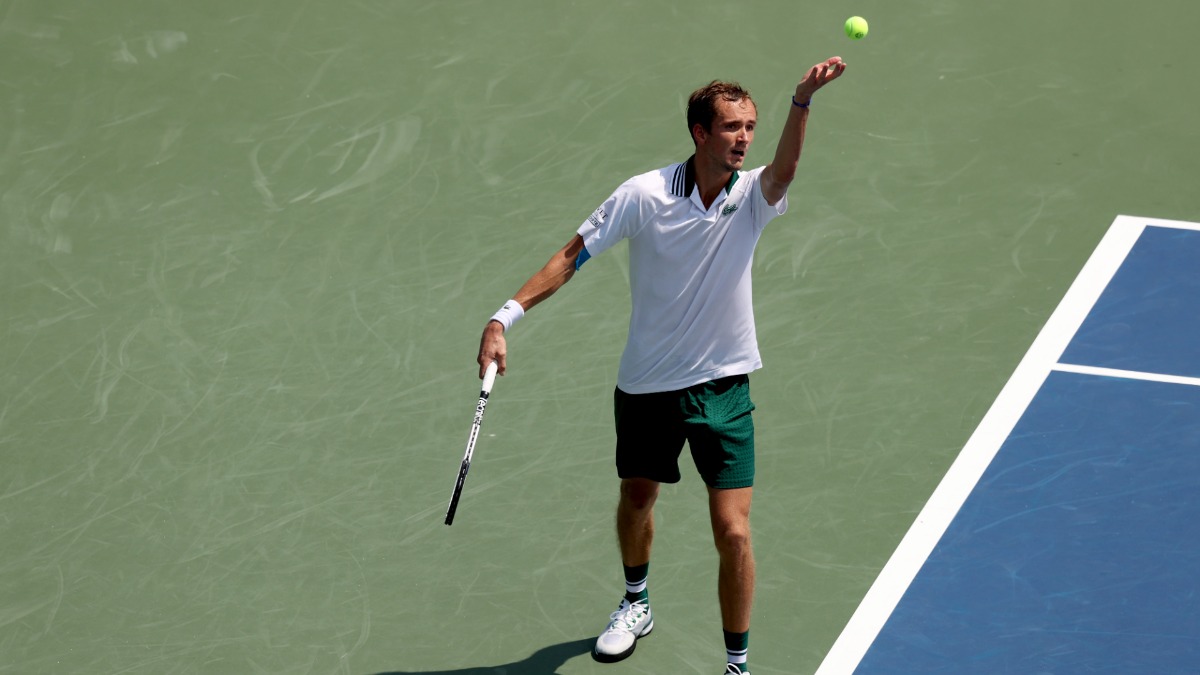 Mason: No Novak, no Roger, no Rafa doesn’t mean winning his second Western & Southern Open championship will be easy for top-seeded Daniil Medvedev.

Medvedev, the 2019 champion and last year’s runner-up to Novak Djokovic, advanced to the quarter-finals of the US Open tune-up event Thursday with a 6-3, 6-3 victory over Grigor Dimitrov.

“It was definitely a great level of tennis,” Medvedev said. “It was pretty hot for both of us. I saw Grigor struggling, so I figured that’s how it is. It’s the same for everybody. Our bodies are getting more used to the heat.”

Second-ranked Naomi Osaka wasn’t as lucky. In the second match of her first tour appearance since late May, Osaka sprayed balls all over the court in a 3-6, 6-3, 6-3 loss to No 76 Jil Teichmann.

Osaka repeatedly punched her left thigh with her left wrist and talked loudly to herself, trying to get herself going, but she was impassive as she shook hands at the net with the giddy Teichmann.

Top-ranked Ash Barty rolled through the first 10 games of her match with defending champion Victoria Azarenka in a 6-0, 6-2 win to reach the women’s quarter-finals.

“I think sometimes the scoreline in tennis can fool you,” Barty said. “Though it seemed like a quite convincing scoreline in the match, each and every game had crucial poits and I was able to win most of those.” Medvedev bounced back up after a nasty fall early in the second set and went on to close out the win.

“You can’t see this on video, but my racket got between my legs and hit the back of my calf,” Medvedev said. “I don’t know how that happens. I actually have a bruise on my calf. A bruise is a bruise. It’s nothing serious.”

The second-ranked Russian, the winner last week in Toronto, won when Dimitrov double-faulted on match point. Medvedev has been on the court for only 2 hours, 28 minutes while winning his first two matches in straight sets after a first-round bye.

Medvedev is the first player not named Djokovic, Roger Federer, Rafael Nadal or Andy Murray to crack the top two since July 18, 2005. Injuries and other issues kept Djokovic, Federer and Nadal from competing this year.

While his matches have been short, Medvedev feels winning will go a long way.

“The more matches I can win in these two tournaments that are similar to New York, the more confidence you have,” he said.

“Confidence is the big key. It’s good coming there knowing that you’re capable of playing good. Now, I know it’s possible. A Grand Slam is a Grand Slam. They’re tough. Opponents want to beat you. You hope you show your best tennis.”