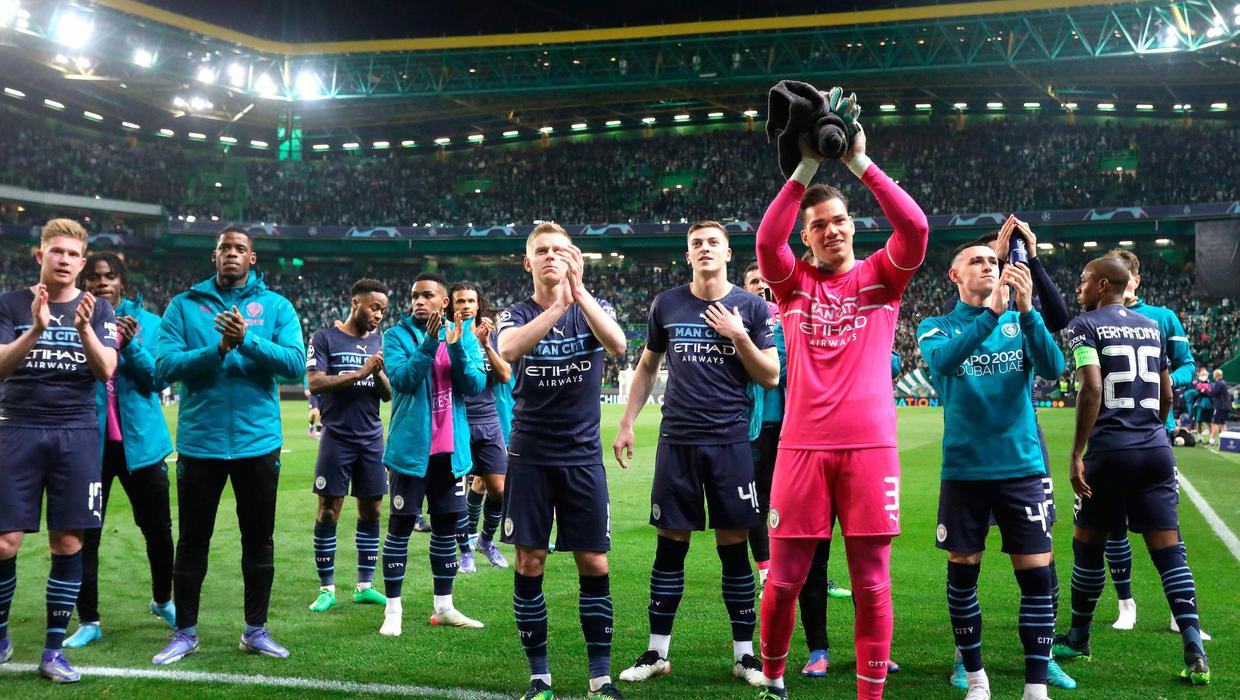 Guardiola’s side produced a swaggering display at the Jose Alvalade Stadium to all but secure their quarter-final place before the second leg in Manchester on 9 March.

Riyad Mahrez opened the scoring and Silva bagged the second before Phil Foden made it three by the 32nd minute.

With City at their imperious best, Portugal forward Silva struck again on his return to his homeland and Raheem Sterling’s gem rounded off the demolition after the interval.

City are unbeaten in their last 13 games in all competition, a hot streak that now includes 12 wins.

Sterner tests will await City later in the competition but this was a significant statement of intent that will have been heard all around Europe.

Determined to keep his players grounded, Guardiola said: “The difference between the two teams is not 5-0 but we were so clinical. We punished them.

“We had some simple passes that we lost. Against the top sides in Europe we would be punished.

“We have one more game to be in the quarter-finals and this is what you want. The players know me and the way we work that we can do better.

“I’m incredibly happy, please don’t misunderstand me, but we can do better.”

With City nine points clear at the top of the Premier League in their pursuit of a fourth title in five years, there is no questioning Guardiola’s domestic preeminence.

But Champions League success has been harder to come by.

Guardiola insisted this week that critics of his flawed European record over the last decade are “jealous” of his achievements.

Yet the Spaniard hasn’t won the Champions League since 2011 with Barcelona, while City are still waiting to lift the trophy for the first time.

City’s Champions League history is littered with unexpectedly premature exits, but they came painfully close last season, losing 1-0 to Chelsea in the final in Porto.

Back on Portuguese soil to launch a knockout stage campaign they hope will climax with silverware in the final in Saint Peterburg, City’s sublime performance underlined their desire to go one better this time.

Sporting’s fans did their best to make it a hostile evening, loudly jeering Silva, Ruben Dias and Joao Cancelo for their spells with arch rivals Benfica.

But City took just seven minutes to silence the ear-splitting din with a sumptuous move.

Silva found Foden in the Sporting area and his shot was pushed out by Antonio Adan to Kevin De Bruyne, who scooped it back into the six-yard box for Mahrez to slot into the empty net.

Initially disallowed for offside, it took a lengthy VAR check before Mahrez could celebrate his 10th goal in his last 11 Champions League appearance.

City were in the groove and Silva produced a moment of magic in the 17th minute.

When Rodri’s header dropped in the Sporting area, the hosts were too slow to react and Silva pounced with a blistering half-volley that flashed in off the underside of the crossbar.

Guardiola’s team were so slick that even Sporting’s supporters were moved to applaud after the visitors’ third goal.

Mahrez twisted and turned on the right flank before whipping in a low cross that evaded Sporting’s flailing defence, allowing Foden to finish with ease on his 150th City appearance.

City weren’t done yet and the fourth goal arrived in the 44th minute.

Cancelo’s lofted pass picked out Sterling’s run into the Sporting area and his cutback was dispatched by Silva via a deflection.

Silva was denied a hat-trick five minutes into the second half when his header was ruled out for offside.

But Sterling put the seal on City’s masterclass in the 58th minute, taking aim from 20 yards and curling a superb strike into the far corner.