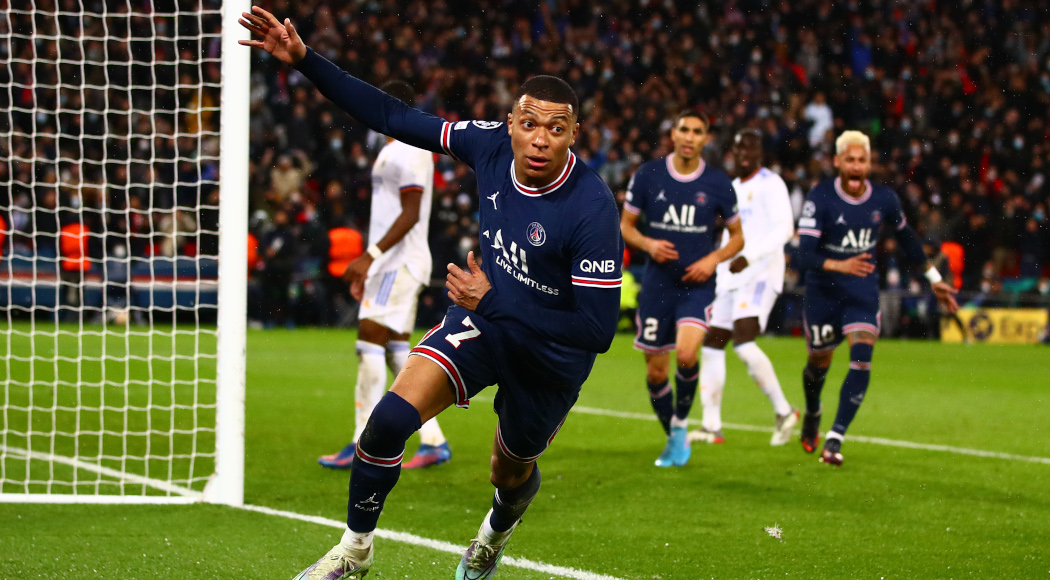 Kylian Mbappe struck in the fourth minute of injury time to give Paris Saint-Germain a precious 1-0 win over Real Madrid in the first leg of their heavyweight Champions League last-16 tie on Tuesday.

It looked as though Real would escape with a draw after weathering a first-half onslaught from PSG before Lionel Messi had a penalty saved by Thibaut Courtois just after the hour mark at the Parc des Princes.

Then, in the last minute of stoppage time, Mbappe burst into the box from the left and between two defenders before finishing past Courtois for his 22nd goal this season.

“I got myself into some space and then it was one against two in the box, and in the box the attacker is always in control,” Mbappe told broadcaster Canal Plus.

“The defenders were going back and I could decide where I wanted to go, and then I managed to put it between the legs of Courtois.”

Tipped to move to Madrid when his contract in Paris expires at the end of the season, Mbappe’s last-gasp strike means his current club have the edge heading into the return at the Santiago Bernabeu on 9 March.

He added: “We are very pleased to have this slight advantage but there is a return leg to come and we need to make sure we prepare well in our upcoming league matches.”

The France World Cup-winning striker may have focused much of the attention coming into this tie amid the speculation about his future but the array of attacking talent elsewhere could not be overlooked.

Messi was coming up against Madrid for the first time since leaving Barcelona, for whom he scored a record 26 goals in the ‘Clasico’ over his years at the Camp Nou.

Real also knew all about the threat of Angel Di Maria, who won the Champions League with the Spanish giants in 2014.

He started because Neymar was only deemed fit enough for a place on the bench having not played since late November due to an ankle injury.

The fragile Brazilian may have wondered how he might fit back into Mauricio Pochettino’s team as he watched the way they played without him in the first half.

PSG showed a hunger that has been lacking for most of the campaign in Ligue 1 even as they built a huge lead at the top of the table.

PSG’s pressing game suffocated their opponents, although Real were seemingly quite happy to defend deep and give up possession, aware that a 0-0 draw would do just fine with the away goals rule scrapped from this season.

That meant Karim Benzema, Real’s top scorer making his return after a three-game spell out injured, saw practically none of the ball along with the two players flanking him, Vinicius Junior and Marco Asensio.

For most of the first half, PSG played perhaps their best football since the arrival of Messi last August. Yet Courtois only really had to make one save of note in that time, to deny Mbappe in the 18th minute.

The visitors would have tried to regroup at half-time, but less than five minutes after the restart Mbappe forced Courtois into an excellent save low to his right.

Courtois then topped that by diving to his left to keep out Messi’s 62nd-minute penalty, awarded after Mbappe was chopped down by Dani Carvajal, who he had tormented all evening.

The French club failed to score when on top in the first half and had now squandered a glorious chance to go in front. The miss summed up Messi’s underwhelming PSG career so far.

Pochettino sent on Neymar, the world’s most expensive player unmistakeable with his peroxide blonde hair.

However, Mbappe had scored a last-minute winner for his team against Rennes in the league last weekend and he again had the last word, leaving the side he might be representing next season up against it in the return in three weeks.

We are confident because we will be playing at home so we will have the stadium behind us,” Ancelotti told Canal Plus.

“Paris have a stronger chance but our hopes of going through are not lost.”