Champions League: Chelsea advance to semi-finals for the first time since 2014 despite loss to FC Porto. 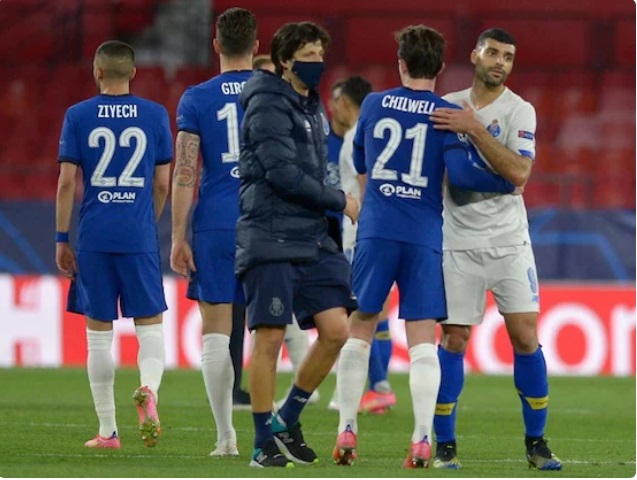 Seville: Thomas Tuchel urged his young Chelsea team to embrace their Champions League “adventure” after they reached the semi-finals for the first time since 2014 despite a 1-0 defeat against Porto in Tuesday’s quarter-final second leg.

Tuchel’s side will play Real Madrid or Liverpool for a place in the final after producing a masterclass in-game management to win 2-1 on aggregate in Seville.

Real travel to Anfield on Wednesday looking to protect a 3-1 lead from the first leg.

They could do worse than copy Tuchel’s tactics as Chelsea smothered Porto with an intelligent defensive approach until Mehdi Taremi’s stunning bicycle kick in the last minute of stoppage time.

That sublime strike was out of character with the rest of Porto’s display as they labored to overturn the 2-0 first-leg deficit.

Chelsea has lost only once in 18 matches since Tuchel replaced the sacked Frank Lampard in January and this was another feather in the German’s cap.

Making it to the last four is an even more admirable feat given the lack of Champions League experience among the majority of Tuchel’s squad.

Tuchel knows the likes of Mason Mount, Reece James, Kai Havertz, Ben Chilwell and Christian Pulisic are all learning on the job, but he hopes their fearlessness will be invaluable.

“We arrive with a very young team. They can fight and run and hang in there. We have to take it as an adventure for them. It is a big step.

“You see when Chelsea was last in the semi-finals. We are not used to being there. It’s a big achievement.”

Tuchel had admitted this week was a make-or-break period for Chelsea.

They passed the first test and can now focus on Saturday’s FA Cup semi-final against Premier League leaders Manchester City at Wembley before returning to the Champions League trail.

“Once you are there you play to reach the final. We need every minute to learn and to grow. You cannot improve without these experiences,” Tuchel said.

“We cannot rely on the biggest experience but we can rely on a hard-working young group. Hopefully, we can stay adventurous to accept the challenge. It will be a big one coming.”

Praising France midfielder N’Golo Kante’s influential display in his first start since a hamstring injury, Tuchel said: “N’Golo is incredible, he is like one and a half or two players.

“Everyone who sees him for the first time loves him. He wins so many balls and gives everybody confidence.”

This week said he wouldn’t want to fight Antonio Rudiger or Cesar Azpilicueta, such is the ferocious will to win coursing through Chelsea’s most vocal players.

Both defenders lived up to Tuchel’s billing as they fought tooth and nail to keep Porto at bay in a niggly clash.

Porto manager Sergio Conceicao added: “I’m really frustrated but I’m proud of what we did in both matches.

“Our performance was very good. We were more of a team than Chelsea. We just lacked that bit of efficiency.”

But Corona couldn’t keep his composure and Jorginho did enough to ensure the shot flashed wide.

Corona’s profligacy let Porto down again when he lashed hurriedly over from 12 yards after Ben Chilwell misjudged Otavio’s high ball.

Taremi’s eye-catching strike with seconds left came far too late for a dramatic finale, with tempers flaring in a heated exchange involving Rudiger and several Porto players after the final whistle.