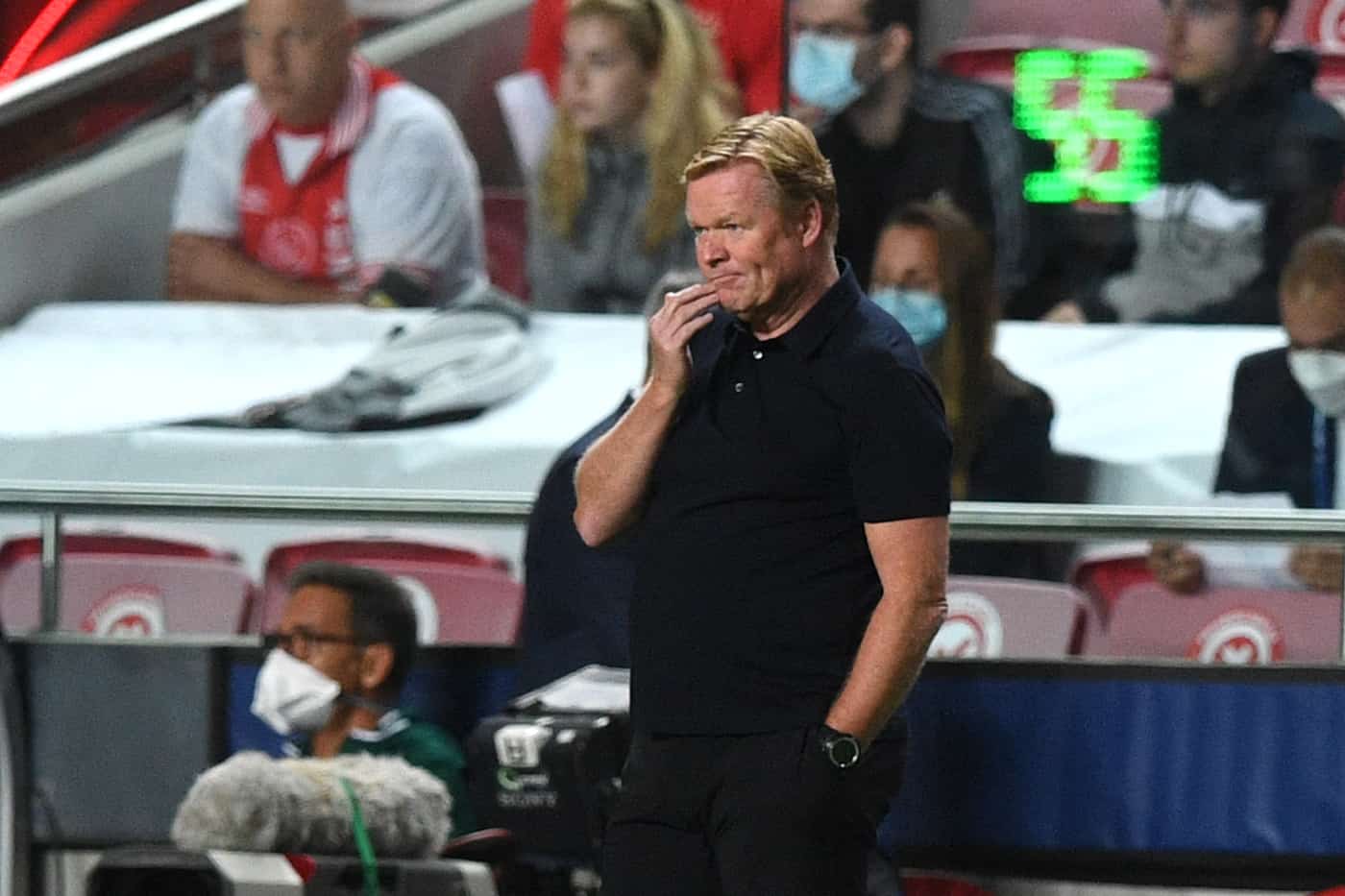 Ronald Koeman said “I don’t know” three times when asked if he has the support of the Barcelona board after a 3-0 defeat at Benfica in the Champions League left the Dutch coach on the brink of the sack. Any credit gained from the morale-boosting victory over Levante on Sunday evaporated in Lisbon, where Barca were subjected to yet another European humiliation that puts their hopes of reaching the knock-out stage in doubt. Club president Joan Laporta will hold a meeting on Thursday morning, according to reports in the Catalan press, in which it will be decided whether Koeman should remain in charge for Saturday’s crunch La Liga game against Atletico Madrid.

That a change is even being considered before one of the most important games of the season, and with an international break coming up immediately after, shows how little confidence in Koeman there is left.

When Koeman, who played for Barca in 1989-1995, was appointed by Laporta’s predecessor Josep Maria Bartomeu in August 2020 the club beamed “welcome home!” and called him “a legend”.

But after an encouraging first season in which Barcelona won the Copa del Rey and in the end were disappointed not to win the league, Koeman’s homecoming has quickly turned sour.

He has never enjoyed the backing of Laporta, who tried to find a replacement in the summer but was unable to find a suitable successor or more likely persuade them to join.

For a while it was a marriage of convenience, but the relationship has grown bitter in recent weeks, with Koeman’s demands for support and attempts to lower expectations received with increasing irritation at the club.

“What I don’t like is an attitude of acceptance, a certain defeatism,” Laporta said last week.

Barcelona’s dire financial situation would hamper any coach as a string of senior players have left and inferior ones been brought in. Lionel Messi and Antoine Griezmann were allowed to depart, replaced by Memphis Depay and Luuk de Jong.

Koeman has emphasised the point repeatedly that this team is not the Barcelona of old and expectations have to be adjusted accordingly.

“We have changed many things and we are missing some soldiers,” said Koeman. “I’m tired of always repeating the same thing. We have lost the players who made the difference. For me it is clearer than water.”

For a long time, many subscribed to Koeman’s mantra as a 1-1 draw with Paris Saint-Germain in last season’s Champions League was hailed as a sign of progress, even though it came after a 4-1 loss in the opening leg.

But the excuses have worn thin, in part because of results — Barcelona have won only once in their last five games — but also performances, which have been increasingly devoid of creativity or identity.

When Barcelona were held by Granada earlier this month it was not so much the draw as the fact they finished with defenders Gerard Pique and Ronald Araujo up front.

“If you look at the list (of players), what are you supposed to do?” asked Koeman.

Koeman will also know that, despite the upheaval, a squad that boasts Pedri, Frenkie de Jong, Depay, Sergio Busquets, Pique and Marc-Andre ter Stegen should be doing better than bottom of their Champions League group and sixth in La Liga.

Koeman said he thinks he has the support of the players, but when Busquets was asked if changing coach would help, he did not raise much of a defence. “We are in a critical situation,” Busquets said.

Besides, it will be Laporta and the board that make the decision on Koeman’s fate — and it looks increasingly a case of when he goes, not if.