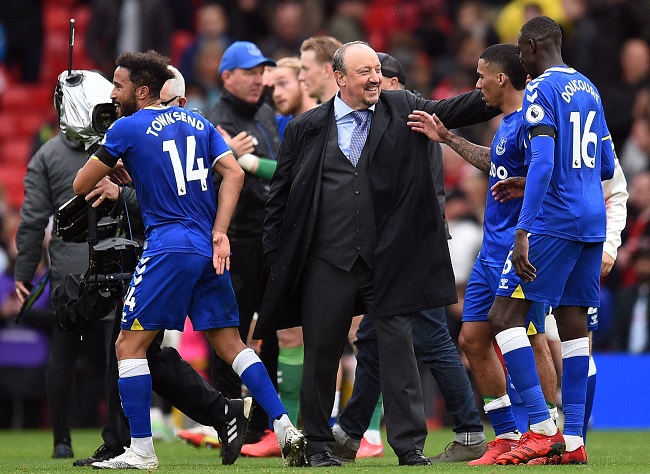 Burnley’s match at home to Everton on December 26 has become the latest Premier League fixture to be postponed due to a coronavirus outbreak, it was announced Friday. Covid-19 cases within the Everton camp had seen the Merseysiders request a postponement on Thursday. But that initial plea was rejected despite Everton manager Rafael Benitez saying he only had nine fit outfield players at his disposal for the fixture on Boxing Day, traditionally one of the busiest days in the English football calendar.

Everton, however, said Friday that the game had been called off, with a club statement saying: “Our Premier League fixture at Burnley on Boxing Day has been postponed due to the number of COVID cases and injuries in our squad.”

The Premier League added it had taken the “regrettable” decision to postpone the game following a board meeting on Friday.

“The board reviewed the club’s request today to postpone the match following further injuries to their squad.

“They concluded that the club will not be able to fulfil their fixture this weekend as a result of an insufficient number of players available to play due to Covid-19 cases and injuries.”

A total of 13 matches have now been called off in the past two weeks as Britain battles record numbers of positive Covid cases due to the Omicron variant of the virus.

Benitez said Thursday he was “surprised” that Everton’s game had been expected to go ahead, after two other Boxing Day matches — Liverpool v Leeds and Wolves v Watford — were postponed due to Covid cases.

“Talking to a wall”

Tottenham Hotspur manager Antonio Conte said Thursday’s meeting between the Premier League and all 20 top-flight bosses to discuss the escalating Covid situation affecting English football’s top flight had been a waste of time.

The virtual meeting was designed to let managers air their concerns over a congested fixture list after Premier League clubs had decided to plough on with the scheduled programme rather than pause the season.

Manchester City manager Pep Guardiola suggested the only way football authorities would address welfare concerns was if the players went on strike.

But with industrial action looking highly unlikely, Conte said discussions with the Premier League had been akin to talking to a wall.

“If I have to be honest, it was a meeting that we tried to speak and some coaches tried to speak, to ask about solutions but I think everything was decided,” Conte said Friday.

“I think yesterday (Thursday) it was a wall and for this reason I also prefer to not go into it.”

The Italian, asked at a news conference if the talks had been a waste of time, replied: “I think so. Because when you have a wall in front of you, you can speak and ask what you want but every decision was (already) taken.”

Spurs, who have just returned from an enforced two-week break due to a Covid-19 outbreak at the club, are due to host Crystal Palace on Sunday before they visit Southampton on Tuesday.

Norwich manager Dean Smith said it was “lunacy” to expect teams to play two matches in 48 hours in the current circumstances, with the relegation-threatened Canaries set to host Arsenal on Sunday before facing Crystal Palace on December 28.

“We have some fresh cases, but we have got others coming back,” said Smith. We are not sure how many will miss Boxing Day.