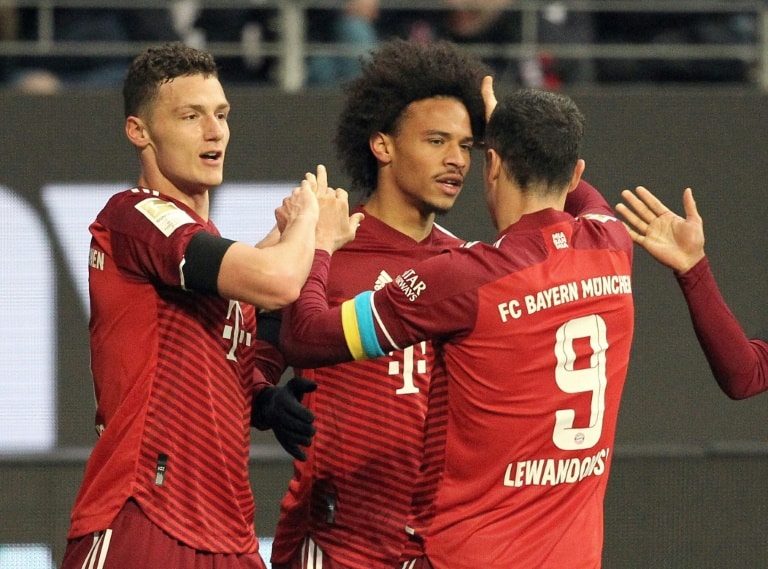 Leroy Sane grabbed a late winner as Bayern Munich won 1-0 at Eintracht Frankfurt on Saturday to open up a nine-point lead at the top of the Bundesliga, while Robert Lewandowski led the league’s show of support to Ukraine in the wake of Russia’s invasion.

Sane came off the bench before sealing the three points for Bayern in a game overshadowed by outside events, with Frankfurt’s stadium lit in the Ukrainian national colours of blue and yellow.

Electronic signs at the ground read “Stop it, Putin!” in a message to Russian President Vladimir Putin.

There was a minute’s silence, as there were at other grounds around Germany, before kick-off.

The Bayern team wore black armbands for the victims of the conflict while Munich captain Lewandowski wore a yellow and blue armband.

“I decided to wear the armband this morning, the world can not accept what is going on, we have to support Ukraine and the people fighting there,” said Lewandowski.

“I am anti-war and think what is happening there can not be allowed, it hurts.

“I hope the whole world supports Ukraine – their people are fighting for freedom and I have huge respect for them.”

Frankfurt beat Bayern in their previous two meetings and this was a nip and tuck affair until Sane intervened.

“That was hard-fought. We could have taken the lead earlier, but the mentality was really good — that was important,” said Bayern midfielder Joshua Kimmich.

Just four minutes after Sane came on, Kimmich’s deft pass through the defence put the winger into space to roll his shot past Frankfurt goalkeeper Kevin Trapp.

It was heartbreaking for the hosts who went close with chances for striker Filip Kostic.

At the other end, Trapp pulled off a string of saves and was poleaxed in the first half when Kingsley Coman’s shot smashed into his face.

“I have already got a bit of a headache,” quipped Trapp. “You can’t defend everything against Bayern and we gave it our all.”

Borussia Dortmund can trim Bayern’s lead on Sunday away to Augsburg.

Haraguchi ended his 22-match wait to score when he cracked in his first goal since joining from second-tier Hanover 96 before the season.

Sheraldo Becker scored Union’s second with a long-range chip from outside the box.

Mainz were reduced to 10 men when midfielder Dominik Kohr was sent off for a second booking.

Lucas Alario fired in off the crossbar before Moussa Diaby scored with two crisp finishes as Bayer Leverkusen consolidated third with a 3-0 home win over Arminia Bielefeld.

It was a miserable Bundesliga debut for Marcel Lotka, Hertha’s fourth-choice goalkeeper with Alexander Schwolow out with Covid and his deputies sidelined by injuries.

After last Sunday’s 6-0 drubbing by Dortmund, Borussia Moenchengladbach earned a point as substitute Breel Embolo scored a late equaliser in their 2-2 draw at Wolfsburg.

The hosts played the last 20 minutes with 10 men after Maxence Lacroix was sent off for bringing down Marcus Thuram, who Embolo replaced before heading in the equaliser.

Gladbach defender Matthias Ginter hit the net with a header in stoppage time, but the goal was ruled out by VAR.

Bottom side Greuther Fuerth are unbeaten in their last six home games as they held Cologne to a 1-1 draw thanks to an equaliser by Sebastian Griesbeck.