Bumrah pens emotional note for Shastri and outgoing coaching staff, thanks them for ‘invaluable contribution’ 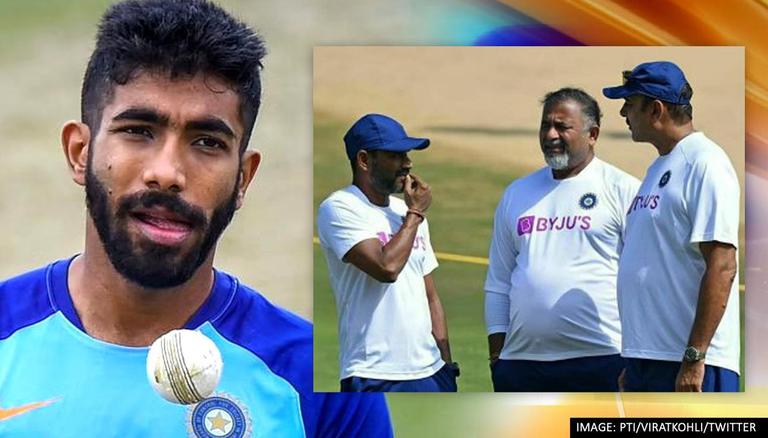 Indian bowler Jasprit Bumrah thanked outgoing head coach Ravi Shastri and other members of the coaching staff for their “invaluable contribution” to the Indian side. Taking to social media, the pacer posted a picture of himself with Shastri, fielding coach R Sridhar and bowling coach Bharat Arun, sending them best wishes on their future endeavours.

The bowler said he was grateful for Shastri and other members of the support staff being a “constant source of learning and counsel”, adding that they had worked tirelessly behind the scenes. Bumrah also mentioned their “words of support, motivation, and encouragement” which had greatly benefitted the team.

The trio of Shastri, Arun, and Shridhar had this year’s ongoing T20 World Cup as their final assignment. The Indian squad failed to qualify for the semis, crashing out of the tournament in the Super 12 stage.

Shastri will be replaced by former Indian cricketer Rahul Dravid as the head coach, who will have the home series against New Zealand as his first assignment.

Shastri’s tenure as head coach saw the team fail to win any ICC trophy. However, the team performed admirably in all formats of the game.

Under Shastri, the Men in Blue played 43 Tests, winning 25 out of them. The team also won the overseas Test series against Australia twice during Shastri’s five-year tenure.

Under the outgoing coach, the team qualified for the finals of the International Cricket Council (ICC) World Test Championship as well as semi-finals of the 2019 ICC World Cup, but failed to win either tournament.

The Indian side played 76 ODIs, winning 51 of them as well as 43 T20 matches of the 65 games they played under Shastri.

Recently, a video had surfaced of Shastri’sfinal motivational speech as the head coach of the Indian side. The outgoing coach said that the Men in Blue had exceeded all his expectations, calling them “one of the great teams” to have performed brilliantly in all formats of the game in the last five-six years.