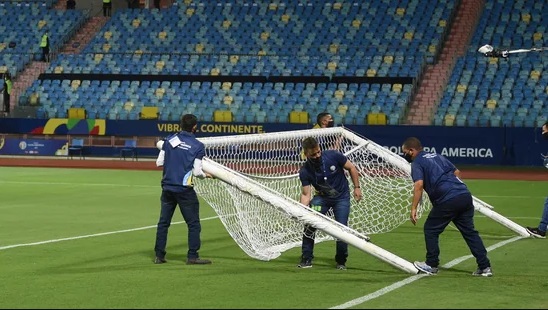 The ministry said Tuesday that the increase, from 41 total cases earlier, includes 19 workers hired for the tournament.

Brazil’s health ministry raised the number of COVID-19 cases related to the Copa America to 52, including 33 players or staffers.

The ministry said Tuesday that the increase, from 41 total cases earlier, includes 19 workers hired for the tournament.

Some of the workers are located in Brasilia, where Brazil opened the tournament on Sunday with a 3-0 win over Venezuela, and others in Rio de Janeiro, which hosted Monday’s 1-1 draw between Argentina and Chile.

The Venezuela squad was depleted after nearly a dozen cases of COVID-19 involving players or staff. Bolivia was missing three players. Staffers of Peru, Colombia, and Bolivia also tested positive for the virus.

Brazil stepped in late as emergency host of the 10-team continental championship despite the country having the second-highest number of recorded deaths from the coronavirus in the world, almost 490,000.

The ministry said 3,045 tests have been conducted so far.