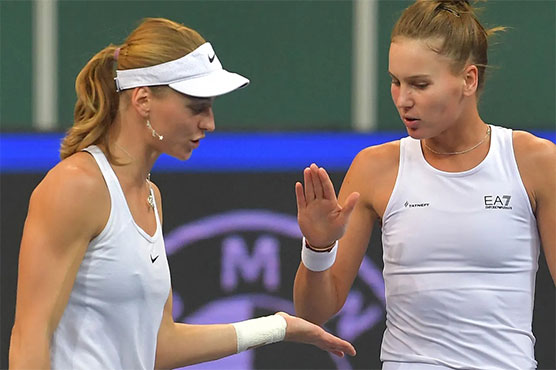 Prague: Liudmila Samsonova and Jil Teichmann stole the show in the Billie Jean King Cup semi-finals in Prague on Friday as they set up a final clash between Russia and Switzerland.

Both had only played doubles at the tournament so far, but they were the crucial force behind Russia’s semi-final win over the United States and Switzerland’s trashing of Australia at the rebranded version of the Fed Cup.

The 40th-ranked Samsonova, Russia’s lowest-ranked player at the tournament, beat Sloane Stephens 1-6, 6-4, 6-3 before teaming up with Veronika Kudermetova to sink Shelby Rogers and Coco Vandeweghe 6-3, 6-3 in the doubles.

In the day’s first rubber, Stephens breezed through the first set, but Samsonova was quick to recover, looking much livelier than her opponent and taking the next two sets.

“I was very happy for this opportunity and I’m so happy about the way it finished,” said Samsonova.

Pavlyuchenkova went 4-1 up in the first set against Collins, who had only lost six games in her previous two appearances.

Collins rediscovered her attacking flair fast and although she lost the first set in a tie-break, her aggressive style helped her come back against the increasingly tired and frustrated Russian.

In the doubles rubber, a bouncing ball from Rogers’ smash hit Kudermetova right under the eye in the very first point, but that did not stop the Russians from winning the set on two breaks.

The Russians wiped out four break points as they led 4-2 in the second and then again at 5-2 to finish the thriller.

Teichmann staged an 18-minute wipeout in the first set against Sanders in a clash of two left-handed players.

At 3-0 up in the second, Teichmann had a three-game lapse giving the Aussie some hope, but she recovered and got her job done in 63 minutes.

“It’s never easy to play a leftie — leftie versus leftie is always a bit awkward, but I felt really good, I went for my shots, I played aggressive and I’m very happy about my game,” she said.

Inspired by her teammate, Bencic got off to a flying start, earning a quick break in both sets against Tomljanovic.

Bencic, who won both her singles in the group phase, powered on, never really letting Tomljanovic even think of coming back and finishing the clash after 68 minutes.

“It’s quite incredible, I don’t think we really expected it,” said Bencic.

“Today was very difficult mentally. We’re so happy to be in the final, we cannot believe it yet.”