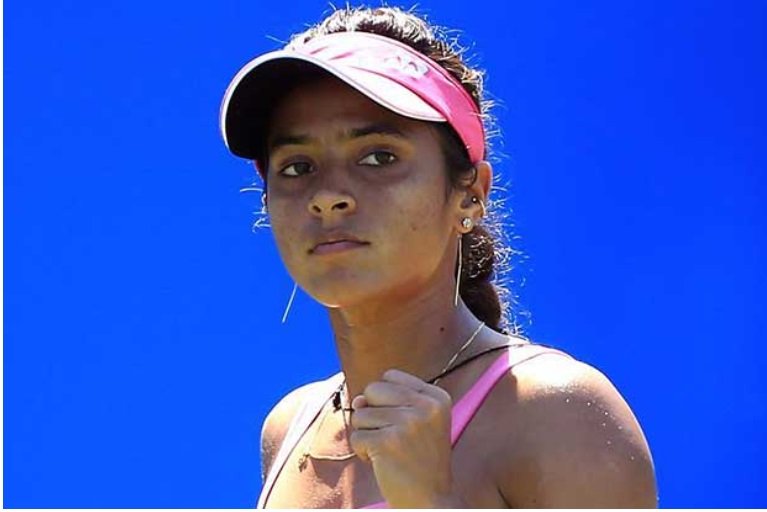 India are playing at this stage of the competition for the first time and on paper are the clear underdogs. The action continues from BJK CUP today at 4:30 PM IST LIVE on Eurosport and Eurosport HD

While Raina pushed her opponent all the way with some scintillating hitting on both sides, Ostapenko’s experience at the highest level was enough to secure the win.

India’s No. 1 Raina, at 174 in the WTA rankings, started off a little nervously but soon got into her stride and battled hard from the back of the court, the favoured domain of the home player who is the 2017 French Open champion.

There were six breaks of serve in the first set, including both opening games, but the telling breaks came in the fourth and fifth games when Ostapenko broke and then held her serve to open up a clear lead.

Once she had overcome early nerves, Raina belted the ball hard, and although the second set was also noteworthy for its errors rather than its winners, Raina forged a 5-2 lead by breaking Ostapenko twice. Ostapenko came back to 5-5 but her concentration wavered once more and the Latvian gave away many points or was beaten for pace by the Indian’s prodigious hitting.

In the deciding set, both players traded shots as equals and the difference between world No. 52 and 174 got blurred. It was only at the very end that Ostapenko shortened the rallies as much as she could to make things more difficult for Raina, and put paid to what might have been a major upset win for India.

“I’m not happy with the game at all,” Ostapenko said. “Just happy with the way I fought. I managed to play not my best and won this game and brought my team the point. But in general, it was tough to play her (Raina),” said the Latvian after a contest that lasted two hours and 24 minutes.

Sevastova broke Thandi in the first game but was broken back in the eighth game before breaking again in the following game and holding on to serve out the set.

Sevastova was more a study in consistency than brilliance, while Thandi, who belted the ball and served powerfully, hit some spectacular groundstrokes. But the Indian did not possess the ability to maintain the level required to throw Sevastova off balance and the Latvian saw out the day’s play by winning the second set to love in a match lasting an hour and 17 minutes.

In the reverse singles, Sevastova will play Raina, while Ostapenko will take on Thandi.

The tie will conclude with the doubles with Latvia’s Diana Marcinkevica and Daniela Vismane scheduled to take on the Indian pair of Sania Mirza and Raina.