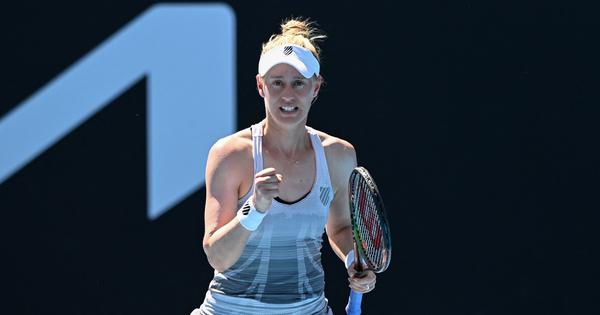 Alison Riske came out on top of the second-longest tiebreak in Billie Jean King Cup history on Friday, edging Dayana Yastremska 7-6 (18/16), 7-5 as the United States took a 2-0 lead on Ukraine.

Riske needed eight set points in the tiebreaker while Yastremska battled back from 5-1 down and had four set points herself before the American pulled off the epic decider in the opening rubber of the tie in Asheville, North Carolina.

“It was so bizarre and amazing at the same time,” said Riske.

Yastremska added: “I was laughing inside and, same time, I wanted to cry. I didn’t know when it’s going to finish. It was so unpredictable both ways.”

It was already an emotional week in Asheville, where the US team did all they could to make the Ukrainians — worried about family and friends at home amid the ongoing Russian invasion — feel welcome.

“It’s like living in two different realities,” Ukraine captain Olga Savchuk said on Thursday of trying to focus on tennis while the brutal fighting 5,000 miles away in Europe remained in the forefront of their minds.

With Ukraine fans, flags and colors prominent in the stands, Riske was pushed all the way by Yastremska, a three-time WTA winner once ranked as high a 21st in the world but now at 93rd.

But American Jessica Pegula sped past 22-year-old Katarina Zavatska 6-2, 6-1 in just 64 minutes as the United States moved close to a place in the finals.

Seven qualifiers are being played on Friday and Saturday.

The winners will join Switzerland, Australia, Belgium and Slovakia in the finals later this year.

Defending champions Russia as well as Belarus have been expelled from the competition due to the invasion of Ukraine.

Iga Swiatek marked her first match as world number one with an 18th straight victory as she steered Poland closer to the finals.

Swiatek went into the tie on a hot streak, putting together 17 successive wins on her way to titles in Doha, Indian Wells and Miami.

“I’m much more confident right now,” said Swiatek. “I feel like I have grown up for sure.”

Raducanu, playing on a clay court for the first time as a professional, wrapped up victory in just over two hours.

The 19-year-old showed no ill effects from losing her toenails in training on the demanding surface earlier in the week in Prague.

Kazakhstan also have one foot in the finals after opening a surprise 2-0 lead over Germany in Nur-Sultan.

Italy are 2-0 up on France in Sardinia.

Paolini, who had lost her last seven matches in the tournament, saved two match points.

Prior to facing the second match point, she had to change her shoelaces.

France, champions as recently as 2019, slipped further behind when Camila Giorgi, the world number 30, had too much firepower for 94th-ranked Oceane Dodin 6-1, 6-2.

Spain, whose five titles all came in the 1990s, are 2-0 up on the Netherlands despite missing injured two-time Grand Slam title winner Garbine Muguruza and world number three Paula Badosa.

No toenails for Raducanu but Briton finding her feet on clay
Billie Jean King Cup: US thwart Ukraine rally to reach finals along with Poland, Czech Republic