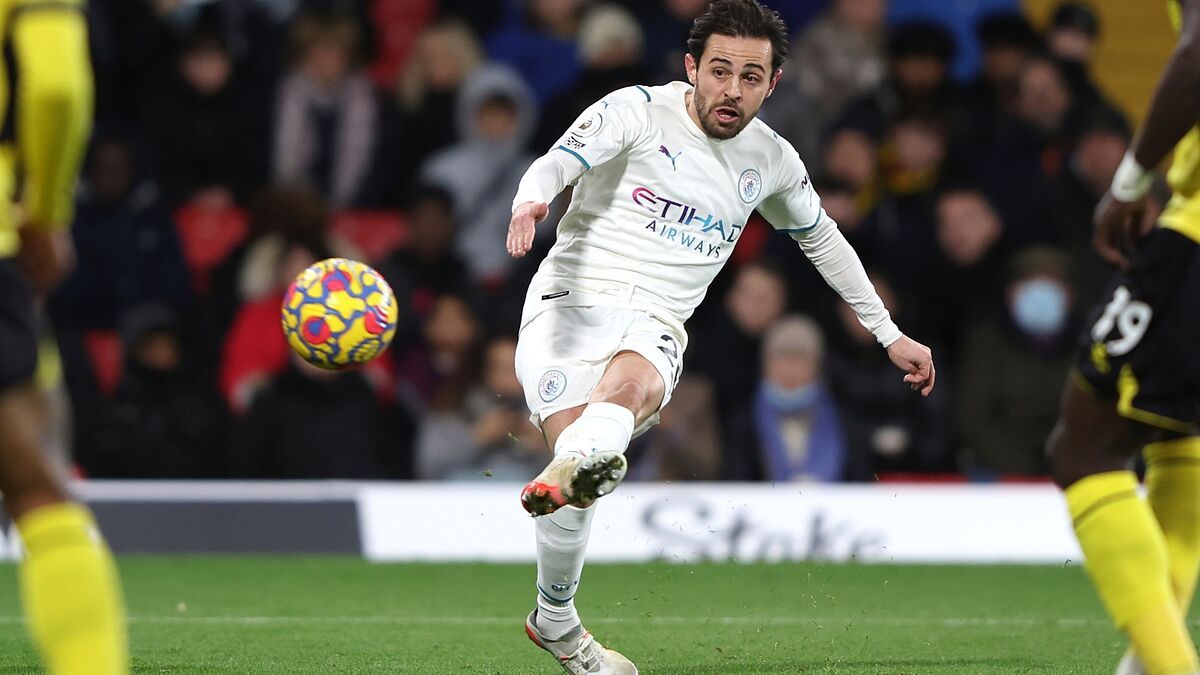 Bernardo Silva backed up Pep Guardiola’s claim he is the best player in the Premier League right now by scoring twice as Manchester City cruised to the top of the Premier League with a 3-1 win at Watford. Silva’s sumptuous cushioned volley against Aston Villa in midweek earned Guardiola’s glowing praise and he produced two more fine finishes to take his tally to seven goals in his last 12 Premier League games. “Thanks to Bernardo because he made me not wrong,” said City boss Guardiola. “I know he’s so humble, there are top players in the Premier League and he is doing so well.”

In stark contrast to Manchester United’s 4-1 humbling at Vicarage Road a fortnight ago that ended Ole Gunnar Solskjaer’s reign, City virtually killed the match as a contest within four minutes.

Phil Foden picked out Raheem Sterling at the back post for the simplest of headers to open the scoring.

Silva slotted home from a narrow angle to double the visitors’ lead and produced a stunning strike into the top corner after the break.

“The game could have been over after 15 minutes,” added Guardiola, whose side took advantage of Chelsea’s 3-2 defeat at West Ham to move one point clear of Liverpool at the top of the table.

“The most important thing is that we won. We played in a consistent way, controlled, we played a good game again.”

Guardiola also has a clean bill of health for his squad heading into the hectic festive period as Foden and record signing Jack Grealish returned to the starting line-up, while Kevin De Bruyne made his comeback from coronavirus as a second-half substitute.

Foden made an immediate impact by picking out Sterling, who was given an incredible amount of space to head in his 99th Premier League goal.

A slick City move soon doubled their lead as Silva fed Ilkay Gundogan and when the German’s effort was saved by Daniel Bachmann, the Portuguese international followed up to slot in at the near post.

Silva made clear his desire to leave City in the summer, but the 27-year-old is back to playing some of the best football of his career.

Mohamed Salah’s free-scoring form for Liverpool may deny him individual awards come the end of the season, but Silva is also putting together his best goalscoring campaign in the Premier League.

His second of the game was a thing of beauty as he turned onto Kyle Walker’s pass and curled the ball high into Bachmann’s right-hand corner.

City have now won seven consecutive games with their form looking ominously like the beginning of a similar run to the 21-game winning streak that started last December and saw them streak towards the title.

But Silva warned they face a tougher challenge this season from Liverpool and Chelsea.

“Liverpool and Chelsea are doing an amazing season, it is going to be tough for us and them to compete with each other,” said Silva. “We know the level is very high, we know how hard it is to win this most competitive league in the world.”

City were denied a clean sheet to round off a fine performance when Cucho Hernandez slotted home at the second attempt after his initial effort came back off the post 16 minutes from time.