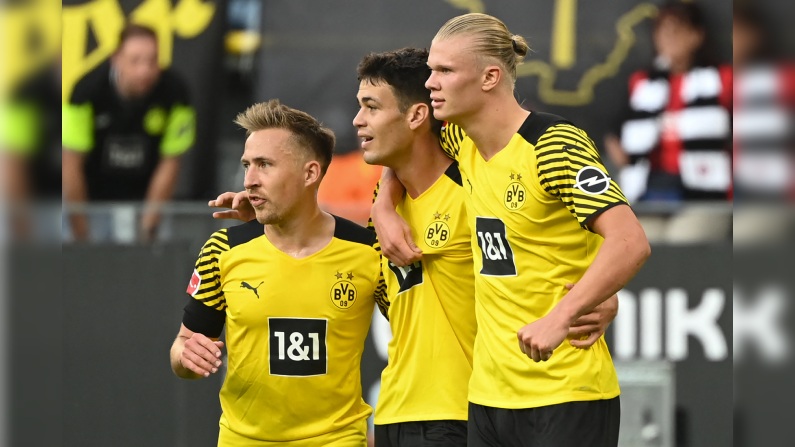 Bayern Munich are the next team to try to shackle Norwegian goal-machine Erling Braut Haaland when the defending Bundesliga champions face Borussia Dortmund in the German Super Cup on Tuesday. Under new coach Julian Nagelsmann, Bayern are bidding to win a tenth straight Bundesliga title, but were held to a 1-1 draw at Moenchengladbach last Friday on the season’s opening weekend. Dortmund threw down a marker before the one-off German Super Cup match by beating Frankfurt 5-2 at home on Saturday with Haaland involved in all of the hosts’ five goals.

The towering striker, who only turned 21 last month, has now scored a phenomenal 62 times in 61 games for Dortmund.

“Haaland is the complete package, that has to be said. We need him,” said Dortmund captain Marco Reus.

Haaland has already scored five goals in his first two games this season.

A hat-trick in the German Cup was followed up by a stunning display in the Bundesliga as he tore into Frankfurt defence, scoring twice and creating goals for Reus, Thorgan Hazard and Giovanni Reyna.

Haaland revelled in creating space for his team-mates, then showed clinical finishing for the chances which came his way.

Only a superb save by Frankfurt goalkeeper Kevin Trapp in added time denied Haaland another hat-trick.

“We are happy that he is here and it’s for others to think about how to stop him.”

Haaland celebrated in front of home fans long after the whistle on Saturday.

German legend and Sky pundit Lothar Matthaeus thinks Haaland could give Dortmund an edge in this season’s Bundesliga title-race.

“He’s a machine, he has that charisma. And that’s why Dortmund are a big favourite to compete with Bayern for the title,” Matthaeus insisted.

However, Dortmund may be running out of time to win the Bundesliga with Haaland, who reportedly has a release clause in his contract to leave in 2022 for 80 million euros ($94 million).

There were reports last month that Chelsea wanted to pay 175 million euros for him to which Haaland replied, “I hope they are just rumours, because that is a lot of money for one person”.

After a performance like Saturday’s, Europe’s other top clubs will be watching.

Bayern are one of those monitoring him closely.

The Bavarian giants will get a closer look Tuesday when Haaland goes head-to-head with Bayern striker Robert Lewandowski, 33 next Saturday, who scored a record 41 league goals last season.

The German media are raving about Haaland, who top-selling daily Bild describe as “the player who tears even non-Dortmund fans out of their seats”.

Dortmund and Bayern first meet in the league this season in December, so Tuesday gives the rivals a chance to size up each other.

“This will be a game in which we can once again measure ourselves against the best team in Germany,” said Dortmund coach Rose.

“We want to prepare well and continue where we left off, because this game can help us to become more consistent.”