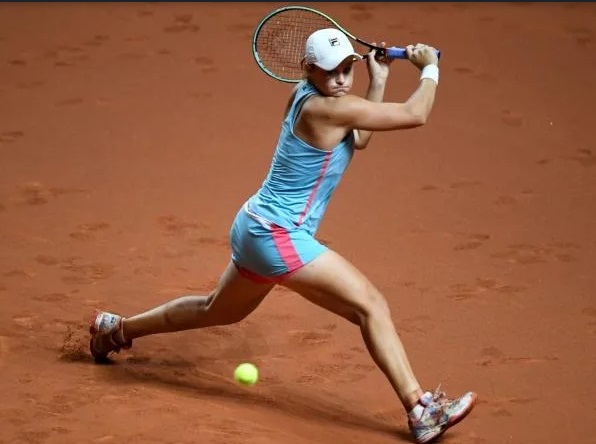 World number one Ashleigh Barty wasted no time on Wednesday booking her place in the quarter-finals of the WTA clay-court tournament in Stuttgart.

The top seed needed just 24 minutes to wrap up the first set against Germany’s Laura Siegemund before claiming a 6-0, 7-5 second-round win.

“It was good to play on a new surface, the court was quite quick compared to what I am used to,” said Barty, who hit six aces in an impressive opening display.

After Charleston, this is Barty’s second clay-court tournament to prepare for next month’s French Open, where she won the 2019 title.

Barty revealed that she was inoculated against the Covid-19 virus while in South Carolina.

“It was nice to know that we have got that small layer of protection.”

The 24-year-old Australian sat out Roland Garros last year because of the Covid-19 pandemic and Poland’s Iga Swiatek succeeded her as champion.

“They are both good strikers (of the ball), so I will watch their match and see how best to play them,” added Barty.

Earlier, Pliskova had to dig deep after losing the second set to German Tamara Korpatsch before sealing a 7-5, 3-6, 6-3 victory in her opener, her first appearance this season on clay.

“I’m super happy that I’m through, but other than that I didn’t see many really good things,” said Pliskova, currently ranked ninth in the world.

“I was struggling a bit in the rallies. I thought there were too many errors from easy balls, but my serve was quite ok.

“First rounds are always a bit nervous, especially a first match on clay.

“I’m just going to hope it’s going to be better.”

There were no such problems for three-time Grand Slam winner Angelique Kerber, who breezed into the second round, sweeping aside Georgia’s Ekaterine Gorgodze in a 6-2, 6-2 victory.

“That wasn’t a bad way to start the clay-court season. She wasn’t an easy opponent and I had a solid game,” said Germany’s Kerber.

The 33-year-old, who has dropped to 26 in the world rankings, expects a “tough match” on Thursday against fourth-seeded Ukrainian Elina Svitolina, who has won all of their last six meetings.

The winner will face Petra Kvitova in Friday’s quarter-final after the seventh seed had to battle hard before sealing a 6-3, 3-6, 6-3 win over Maria Sakkari of Greece.

In Wednesday’s other second-round match, third-seeded American Sofia Kenin was knocked out 7-5, 6-4 by Anett Kontaveit of Estonia.