Barcelona will go to court if punished for Super League role 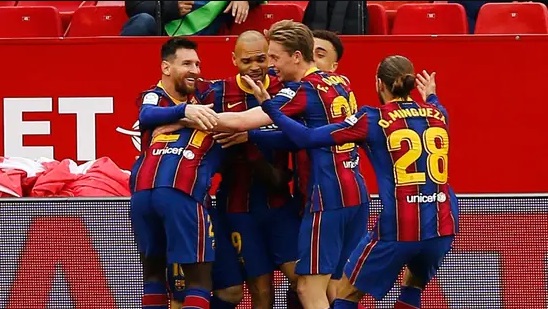 “We will fight to protect the interests of Barcelona and to develop a model of soccer that is sustainable. All clubs are losing money.”

Barcelona’s president pledged Friday to go to the Court of Arbitration for Sport if UEFA punishes the club for its role in the would-be Super League competition.

“We will fight to protect the interests of Barcelona and to develop a model of soccer that is sustainable. All clubs are losing money.”

Of the dozen clubs which wanted to form the new breakaway league outside UEFA’s control, only Barcelona, Real Madrid and Juventus are still on board. The rest quickly abandoned the proposal amid a backlash by soccer authorities and fans.

Those clubs agreed to UEFA’s terms to forfeit 5% of their prize money from European competitions in the 2022-23 season and pay a combined 15 million euros ($18.4 million) as a “gesture of goodwill” to benefit children, youth and grassroots football.

This week UEFA opened disciplinary cases against the three Super League holdouts who face being banned from the Champions League.

UEFA gave no timetable for the expected disciplinary cases against the three which have all qualified on merit for the Champions League next season.

The three clubs have begun legal action in a Madrid court against UEFA and world soccer body FIFA. A judge has asked the European Court of Justice in Luxembourg to consider if restrictions on the rebel clubs are breaking European Union laws.

The legal statutes of UEFA and FIFA prohibit clubs taking legal disputes to ordinary courts outside of soccer’s own judicial bodies that also recognize CAS as a higher authority.