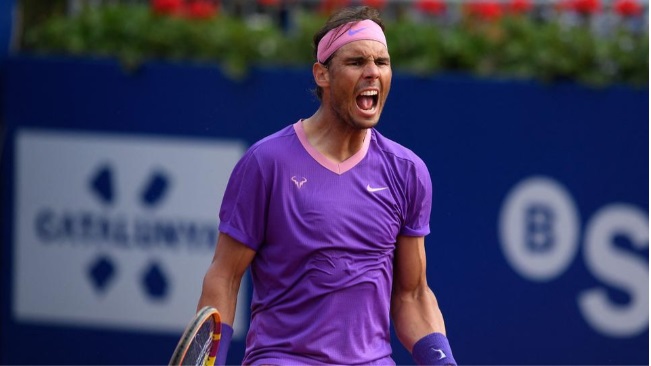 The world number three triumphed 6-0, 2-6, 6-2 over 2014 and 2015 champion Nishikori and next faces Britain’s Cameron Norrie, a fellow left-hander, for a place in the semi-finals.

d to go the distance for the second successive day in Barcelona, defeating Japan’s Kei Nishikori to make the last-eight and stay on course for a 12th title at the tournament.

The world number three triumphed 6-0, 2-6, 6-2 over 2014 and 2015 champion Nishikori and next faces Britain’s Cameron Norrie, a fellow left-hander, for a place in the semi-finals.

Nadal, who suffered a surprise quarter-final exit at the Monte Carlo Masters last week, had also required three sets to beat Belarusian qualifier Ilya Ivashka, ranked at 111, in his Barcelona opener on Wednesday.

Former world number four Nishikori, now down at 39 in the rankings, was left to regret converting just two of 13 breakpoints carved out against the man who also beat him in the 2016 Barcelona final.

Nadal defeated Norrie in their only previous meeting in straight sets in the Australian Open third round in February.

Tsitsipas next faces 11th seeded Canadian Felix Auger-Aliassime who got the better of compatriot Denis Shapovalov 6-2, 6-3.

“I was happy with my level today,” said Auger-Aliassime.

“It’s never easy to play against him and it’s great to have won in straight sets. The next match won’t be easy, a tough challenge.”

Russian third seed Andrey Rublev, the runner-up to Tsitsipas in Monte Carlo, claimed a 6-4, 6-7 (4/7), 6-4 victory over Spain’s Albert Ramos-Vinolas in two and a half hours.

Rublev, who has a tour-leading 26 wins in 2021, fired 35 winners past the Spanish clay-courter.

It was Sinner’s third win over the veteran Spaniard this year.