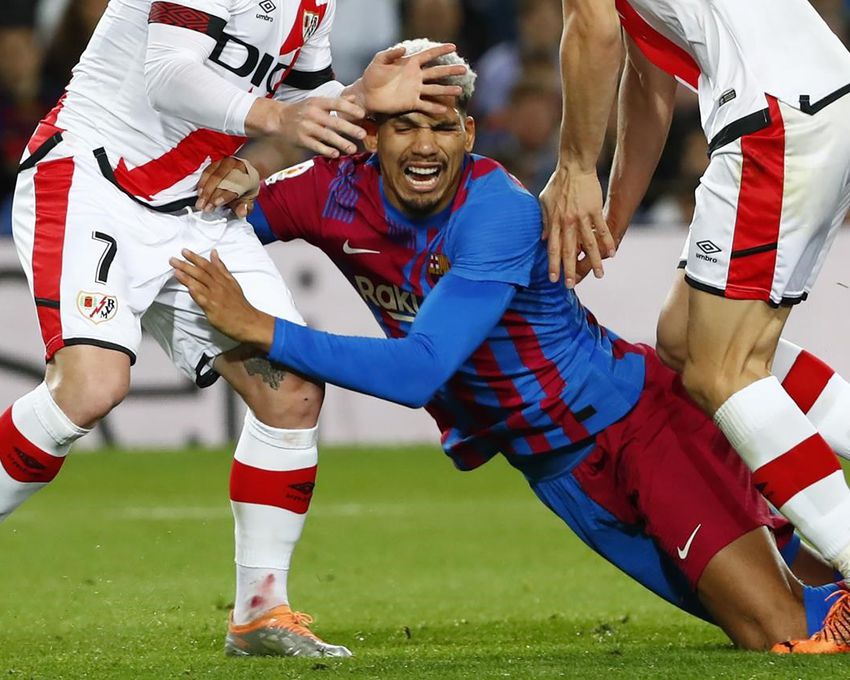 With an unprecedented third straight home defeat, Barcelona is unintentionally clearing the way for Real Madrid to clinch the La-Liga title.

Barcelona lost 1-0 to Rayo Vallecano on Sunday, marking the first time it lost three in a row at home in all competitions in the same season, and leaving leader Madrid just a point away from winning its second league title in three seasons.

Madrid will have its first chance of lifting the trophy on Saturday when it hosts Espanyol. Madrid is 15 points ahead of second-place Barcelona with five rounds to go. The Catalan club has the better head-to-head tiebreaker.

Fans at the Camp Nou stadium booed the team after the final whistle.

“We have been struggling at home,” Barcelona captain Sergio Busquets said. “We’ve been conceding goals early and then it becomes difficult to recover. We are in a bad dynamic right now.”

Barcelona had won seven straight home matches in the league against Rayo, which scored the winner with a shot by Álvaro García after a long pass into the area in the seventh minute.

Barcelona pressed forward the rest of the match but couldn’t capitalize on its several scoring chances.

The loss left Barcelona tied on points with third-place Sevilla and only two points ahead of Atlético Madrid in the final Champions League spot. Securing second place is also important as it guarantees a place in the lucrative Spanish Super Cup in Saudi Arabia.

“We are in a tough situation now,” Barcelona coach Xavi Hernández said. “We are still in the Champions League qualification zone, but we have been making it difficult on ourselves.”

Barcelona won at Real Sociedad on Thursday but was coming off defeats against Cádiz in the league and Eintracht Frankfurt in the Europa League. It hadn’t lost two in a row at home since 2003, and had lost three straight only once, between the 1997-98 and 1998-99 seasons.

It was the second straight win for Rayo after enduring a 13-game winless streak in the league. The Madrid club moved from 15th to 11th with the victory, its second this season against Barcelona. Rayo’s win on Thursday also came in the city of Barcelona, at Espanyol.

Only Bayern Munich had beaten Barcelona twice this season, in the group stage of the Champions League.

The result practically secured Rayo a spot in the first division next season.

The match was postponed from January. No other league games were played this weekend. Real Betis defeated Valencia on penalties on Saturday to win the Copa del Rey.