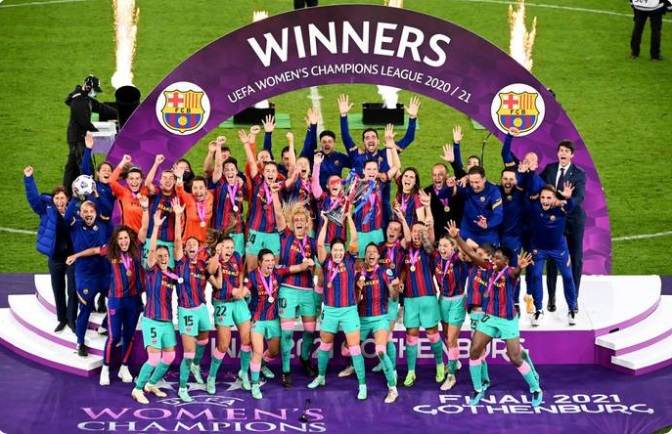 Barcelona put on a brilliant display to beat Chelsea 4-0 to win the Women’s Champions League final for the first time in the club’s history on Sunday.

Coming into the game full of confidence after winning the Women’s Super League title last week, Chelsea was on the back foot from the very beginning as Barca’s rapid passing and the possession-based game proved too much for the Londoners.

Barcelona got off to the best possible start when Lieke Martens hit the crossbar and Fran Kirby’s attempted clearance bounced off Chelsea midfielder Melanie Leupolz before spinning into the net in the opening minute.

Chelsea struggled to deal with Barca’s punishing press and it went 2-0 behind in the 14th minute when Leupolz was penalized for fouling Jennifer Hermoso in the box, and Alexia Putellas made no mistake from the spot.

Chelsea did its best to get forward, but it found its path blocked by a defense that has conceded only five goals in 26 Primera Division games this season.

Aitana Bonmati made it 3-0 seven minutes later, rounding off a superb passing move from a Barca throw-in with a confident left-foot finish, prompting an emergency meeting of the Chelsea players on the edge of their box as the Catalans celebrated.

That discussion failed to resolve their defensive woes as Lieke Martens skipped past Niamh Charles on the left-wing and centred for Norwegian winger Caroline Graham Hansen to steer home a fourth in the 36th minute.

Chelsea’s switch to a more direct style produced an improvement in the second half, but it wasn’t enough to stop the Catalan club from coasting to victory, with the Barca bench exploding in celebration as the final whistle sounded to confirm the side’s status as Europe’s best club side.

Barcelona is the only franchise whose men’s and women’s sides have won the top European tournament.