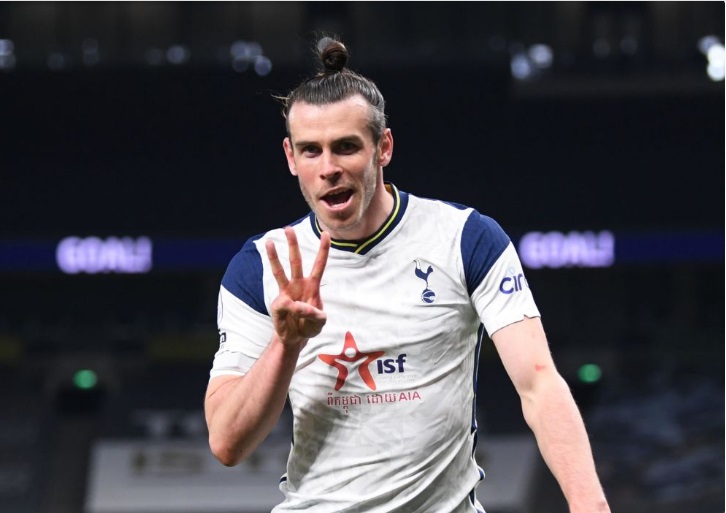 Gareth Bale’s stunning hat-trick earned Tottenham Hotspur a 4-0 win over relegated Sheffield United to keep it in the hunt for a top-four finish in the Premier League on Sunday.

The Welshman, who has returned to Tottenham on loan from Real Madrid having left in 2013, opened the scoring in the 36th minute with a clever flick.

He doubled the lead just past the hour mark with a stylish finish into the top corner — his 50th Premier League goal.

Bale then made it 3-0 shortly afterward when he drilled another left-footed effort low into the corner to complete his first Premier League hat-trick since 2012.

Son Heung-min, who earlier had a goal disallowed, produced a trademark effort to complete the rout.

Tottenham’s second league win under interim manager Ryan Mason lifted it above Liverpool and West Ham United into fifth place in the standings with 56 points, five behind Chelsea, with four games remaining.

Bale’s display, albeit against the league’s bottom club, will leave Tottenham fans asking why he was not given more opportunities to roll back the years by Jose Mourinho.

Eight of Bale’s 14 Premier League appearances under Mourinho were as a substitute but he has started both of Mason’s games in charge, albeit surprisingly only on the bench in last week’s League Cup final defeat by Manchester City.

It looks likely Bale will return to Madrid at the end of the season, although after Sunday’s display Spurs fans will be hoping he can extend his stay.

“You have to take your chances when they come so I’m feeling good,” Bale said. “I just needed to play games and get a run of games and I’m doing that now.

Tottenham was struggling to break down Sheffield United but took the lead when Serge Aurier produced a delightful scooped pass to play in Bale who flicked the ball past Aaron Ramsdale.

Son though he had made it 2-0 with a rasping finish after the break but it was ruled offside by VAR and Tottenham were in danger of losing their grip on the game.

But Son’s pass played in Bale and he picked his spot, smashing a left-foot shot high past Ramsdale.

Aurier claimed his second assist of the game as he slid in Bale on the edge of the area and the 32-year-old powered his shot beyond the goalkeeper.

Son’s right-foot curler in off the post completed a satisfying day for 29-year-old rookie manager Mason.

“Last week was disappointing for everyone. We had a week where we could train and work on the players. We defended strongly as a team. Some of our play was absolutely outstanding,” Mason said.

Mason said he was shocked that Sheffield’s John Fleck escaped a red card for appearing to stamp on the head of Giovani Lo Celso.

The incident occurred in the second half as Lo Celso fell under a challenge from Fleck and the Sheffield player then raked his boot down the side of the Argentine’s head.

Lo Celso later went off and was seen with a large ice pack attached to his head.

“I am so shocked that it wasn’t a red card,” Mason said. “I’m shocked the VAR team didn’t at least tell the referee to have a look. I think it’s a stonewall red card.

“I don’t think there’s a clearer red card. You see the replay once and he’s endangered an opponent. I cannot believe it wasn’t given as a red card. It’s avoidable.”

Mason himself had to retire from the game after suffering a fractured skull while playing for Hull City in 2017.

The Lo Celso incident did not overshadow a second win for two league games for Mason, who is in charge until the end of the season following Mourinho’s sacking.