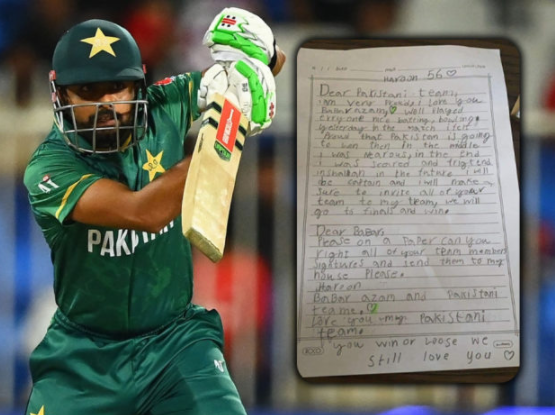 Despite a tough fight by Pakistan in the ICC T20 World Cup, it wasn’t an ideal end for the team. However, the spirt of cricket is alive and kicking, all thanks to fans who love and cherish players no matter the outcome.

An eight-year-old, Mohammad Haroon Suria, penned a heartfelt letter to Azam explaining his reaction to the game and his love for the Pakistan team. The hand-written letter, which has since gone viral, was shared by a journalist on Twitter.

From a future captain to current captain @babarazam258 I hope Babar Azam sends this 8-year old all the signatures 😍@TheRealPCB @TheRealPCBMedia pic.twitter.com/jwociYh3Kb

“Dear Pakistani team, I am very proud, I love you Babar Azam. Well played everyone, nice batting, bowling. Yesterday in the match I felt proud that Pakistan is going to win then in the middle I was nervous, in the end I was scared and frightend. Inshallah in the future I will be captain and I will make sure to invite all of your team to my team, we will go to finals and win, (sic)” the letter read.

The young boy also requested Azam to have the entire team sign their autographs on a piece of paper and have it posted to his home.

Azam took to his Twitter page to share the image of the letter and responded by saying, “Thank you for such a kind letter for us, champion. I ABSOLUTELY believe in you and you can achieve anything with your focus, belief, and hardwork. You will get your autographs but I cant wait to get YOUR autograph future Captain.”

Thank you for such a kind letter for us, champion. I ABSOLUTELY believe in you and you can achieve anything with your focus, belief, and hardwork.

You will get your autographs but I cant wait to get YOUR autograph future Captain. 🙌 https://t.co/FbalPUeBnC

The heartwarming response by the Pakistani skipper won hearts across social media – many hailing it as a move befitting that of a humble and grounded captain who was a true leader in every right.

Azam had earlier backed Hasan Ali when a journalist questioned the dropped catch at a crucial stage of the semi-final, a move which was lauded my many.

“I don’t feel that way [dropping Hasan Ali] because he’s my main bowler. He has won us so many games and obviously, players often drop catches. But the way he’s been fighting, I’ll definitely back him. It often happens with a player. If an individual has a bad day, he keeps on pushing himself. He is down right now but we’ll try to uplift his confidence. Logon ka kaam hai batein karna, hamara kam hai unko uthana (People will continue talking but we’ll keep backing our players,” he said.

The young boy’s love for the Pakistan team is quite similar to what Azam feels for his team members. He took to Twitter to wholeheartedly congratulate his team after losing to Australia for a brilliant run in the T20 World Cup. He expressed his pride and called them “champions” and emphasized of his faith that they would bounce back stronger.

Keep the head high, team. You were impressive and played like true champions. We will definitely learn from this experience and come back stronger, In sha Allah. Extremely proud of my pack.

Pakistan won all five matches of the Super 12 stage before losing to Australia by five wickets in the second semi-final on Thursday. Mohammad Rizwan and Fakhar Zaman’s fighting half-centuries lifted Pakistan to 176 in 20 overs, a total which Australia managed to chase with an over to spare.