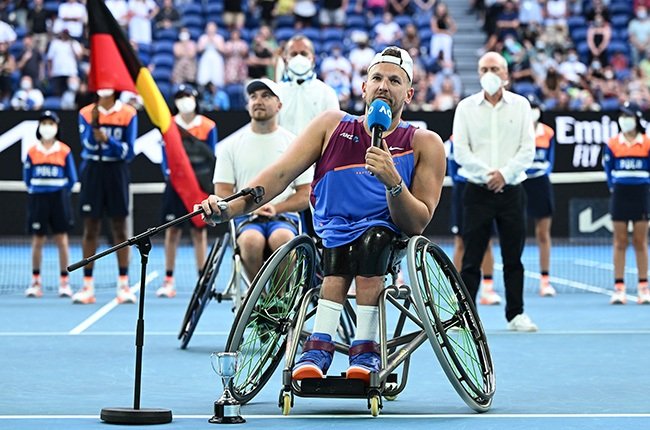 Melbourne: Wheelchair great Dylan Alcott bowed out of tennis Thursday after losing the Australian Open final, drawing the curtain on a glittering career in which he became a prominent disability advocate.

The 31-year-old Australian, the most successful quad tennis player ever with 15 Grand Slam singles and eight doubles titles, announced his decision to quit before the tournament.

It followed his history-making exploits in 2021 when he completed the Golden Slam of winning all four quad singles majors and the Paralympics gold in the same year.

Thank you for everything 💙#AusOpen • #AO2022 pic.twitter.com/5KnxT2OaiO

But the world number one, a prominent sporting and media figure in Australia, was unable to go out on a high, losing to second-seeded Dutchman Sam Schroder 7-5, 6-0 on Rod Laver Arena.

“I’m really the luckiest guy in the world, and I didn’t need to win today to realise that,” he said courtside, holding back tears.

Schroder paid tribute, saying: “Thank for your all that you’ve done. You’ve inspired so many people out there to get out and play sport.”

Retirement from the courts coincided with Alcott being named Australian of the Year on Wednesday, a role he pledged to use to keep changing perceptions of disability.

“My purpose is to change perceptions, so people with disability can live the lives they deserve to live, not just in sport, but in employment, in education, in film, on TV, in dating, going to bars, going to festivals,” he said.

“It’s the reason I get out of bed. It’s not to win gold medals or Grand Slams.”

During a lengthy sporting career, Alcott found success initially at the Paralympics in wheelchair basketball and was part of the gold-medal winning Australia team at Beijing 2008 aged just 17.

He added a basketball silver in London four years later before switching to quad tennis for Rio 2016, winning gold in both singles and doubles.

In Tokyo in September he had to settle for silver in doubles but his singles gold set him up to complete the Golden Slam in New York just a week later.