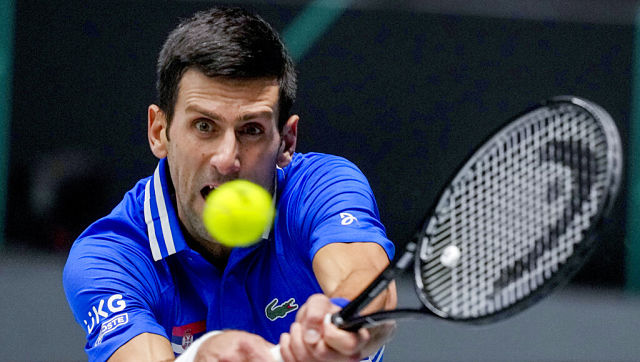 Madrid: Novak Djokovic ended his rollercoaster season with a Davis Cup defeat on Friday and then promised to make a decision on his Australian Open participation “very soon”.

The world number one, who captured three of the season’s four Grand Slams in 2021 to take him level with Roger Federer and Rafael Nadal on 20, is still a doubt for January’s Australian Open after organisers insisted only fully-vaccinated players will be allowed into the country.

The 34-year-old has refused to say whether or not he has been vaccinated against coronavirus .

“I understand you want answers on where and how I am going to start the new season, but we’ll see what the future holds,” said Djokovic, a record nine-time champion in Melbourne.

“I can’t give you a date, but obviously the Australian Open is coming soon, so you will know very soon.”

He added: “I will try to use the next few days to recover, rest and forget about tennis. I am really tired from this season and all this year.”

Djokovic’s dream of adding a second Davis Cup to his 20 Grand Slam titles was shattered when Serbia were defeated by Croatia in the semi-finals in Madrid on Friday.

Djokovic and partner Filip Krajinovic lost 7-5, 6-1 to top-ranked Mate Pavic and Nikola Mektic, the Olympic and Wimbledon champions, in the decisive doubles rubber.

The world number one, unbeaten in singles in the tournament since 2011, triumphed 6-4, 6-2. It was his 19th successive Davis Cup singles win.

“The season ends today. I don’t regret any tournament I have played. I did my best as always,” added Djokovic.

“Unfortunately, a singles victory is not enough. I try to learn especially from difficult times like this. As painful as they are, these are usually the greatest opportunities to get stronger and grow.”

Djokovic closed his 2021 season having agonisingly missed out on the first calendar Grand Slam by a male player in more than half a century when he lost the final of the US Open.

His hopes of a first Olympic singles gold medal were also dashed in Tokyo.

However, he still ended 2021 having claimed the year-ending world number one ranking for a record seventh time and will on Monday mark a total of 350 weeks in the top spot.

Djokovic, who played in the Serbia team which won its first and only Davis Cup in 2010, said that his team needs to find a reliable doubles pairing if they are ever to win a second title.

“We knew from the start that this match would be the most difficult of the tie,” he said.

“We knew that if it was relying on doubles, we wouldn’t be the favourites, because we played the best pair in the world, players who play together all the time, who know each other very well, who are doubles specialists, who only focus on that.

“To win the Davis Cup, you need a doubles team, otherwise it will be very difficult, it’s a lottery. It’s like climbing Mount Everest.”