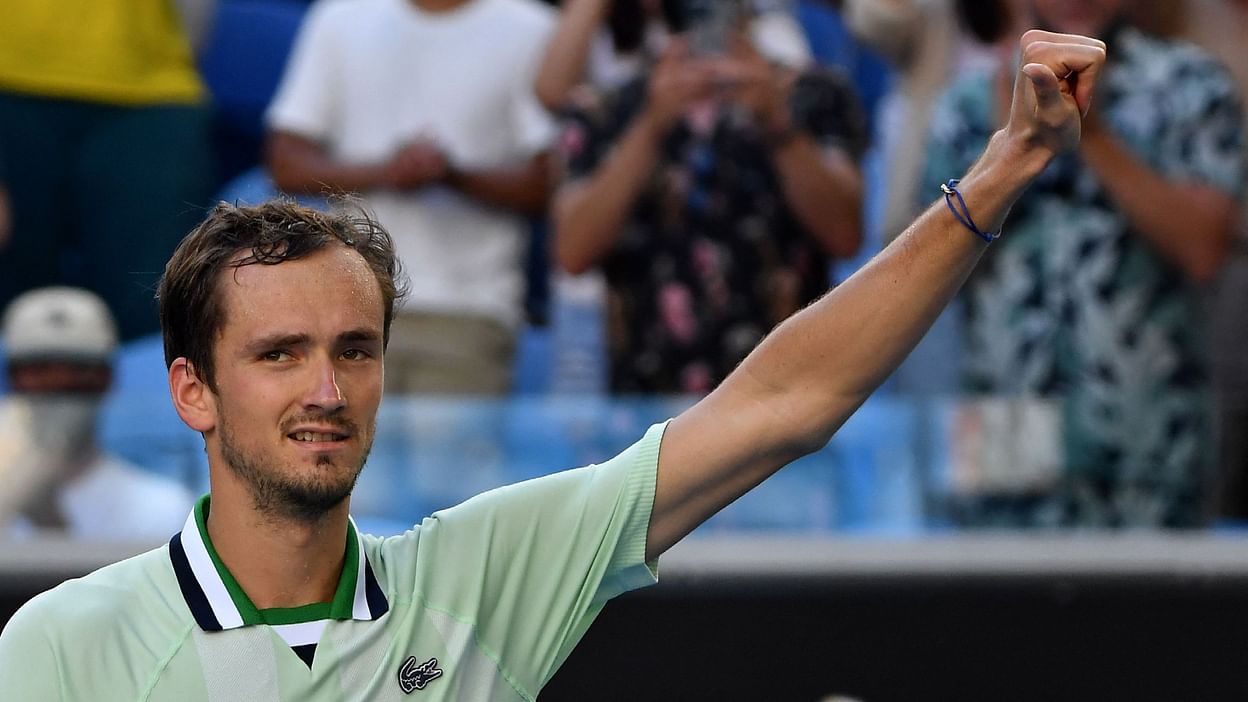 Melbourne: World number two and title favourite Daniil Medvedev won over the Australian Open crowd on Saturday as the Russian “villain” eased into the last 16 along with Stefanos Tsitsipas.

After the drama of Friday, when defending champion Naomi Osaka exited Melbourne in the third round, the leading women’s seeds were also mostly untroubled on day six.

Second seed Aryna Sabalenka overcame some of her serving yips and Simona Halep was an emphatic winner, the former number one now playing self-described “dinosaur” Alize Cornet on Monday for a place in the quarter-finals.

Medvedev, the de facto men’s top seed after the deportation of defending champion Novak Djokovic on the eve of the Grand Slam, said some fans at Melbourne Park had a “low IQ” after they booed him in his second-round victory over Australian showman Nick Kyrgios.

The reigning US Open champion needed four sets and a large dose of composure to see off Kyrgios and silence Rod Laver Arena, and was branded a “villain” by local media for the way he riled up the crowd.

But it was altogether more comfortable as he dismissed unseeded Dutchman Botic van de Zandschulp and he won some friends in the process.

The 25-year-old Medvedev kept his cool in sweltering conditions on Margaret Court Arena to roll through 6-4, 6-4, 6-2 in 1hr 55min and faces American Maxime Cressy in the fourth round.

“I’ll put it this way, it’s easier to play a guy from the Netherlands than a guy from Australia in Australia in Melbourne,” said Medvedev, who has a similar love-hate dynamic with the crowd in New York.

“Every good relationship must have its ups and downs so I think it’s good, it’s entertaining and it’s real, there is some relationship going on.”

Greek fourth seed Tsitsipas, who is chasing a maiden major, was also largely untroubled in a 6-3, 7-5, 6-7 (2/7), 6-4 win over unseeded Frenchman Benoit Paire and plays American Taylor Fritz next.

Tsitsipas’s serve was the foundation. He did not drop a service game despite losing a set and sent down 21 aces.

Medvedev and Tsitsipas, two of the generation coming up fast behind the “Big Three” of Djokovic, Rafael Nadal and Roger Federer, could meet in the semi-finals.

There was defeat however for Andrey Rublev, the Russian fifth seed, who lost in four sets to 2018 runner-up Marin Cilic.

Auger-Aliassime is regarded as a serious upcoming talent in men’s tennis and the 21-year-old Canadian warned his rivals that he was beginning to feel at home at the business end of majors.

“Now of course playing more and more Grand Slams and I have gone to semi-finals (US Open last year), I feel more in my place,” he said.

In the women’s draw, Halep swatted aside Danka Kovinic — conqueror of US Open champion Emma Raducanu — 6-2, 6-1 in just 64 minutes to set up a date with Cornet of France.

The fit-again Halep came into the tournament full of confidence after her first title in 16 months earlier this month at a Melbourne warm-up event and was always in charge.

The 14th seed next meets unseeded Cornet, who celebrated her 32nd birthday by slugging it out with Slovenian 29th seed Tamara Zidansek for a 4-6, 6-4, 6-2 victory.

The crowd serenaded her by singing happy birthday.

“It’s definitely a very, very special victory being back in the second week 13 years after my first (time). It’s quite special,” she said.

“The day of my birthday, I mean, what else can I ask for?”

World number two Sabalenka overcame some of the serving problems that have been plaguing her early season, but still totted up 10 double faults and needed three sets to get past 31st seed Marketa Vondrousova.

Also safely into round four and looking ominous is seventh seed Iga Swiatek, who swatted aside 25th seed Daria Kasatkina, 6-2, 6-3, but 10th seed Anastasia Pavlyuchenkova was a surprise loser to unseeded Sorana Cirstea.