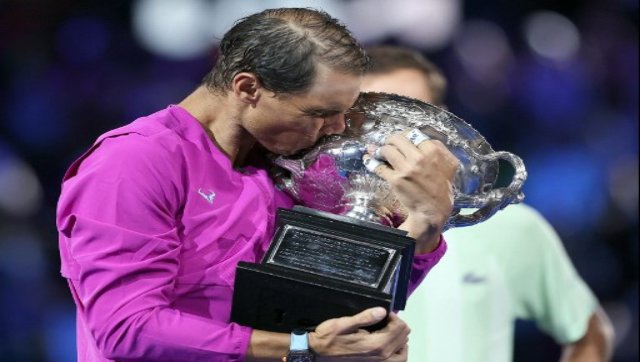 Of all the congratulatory messages that poured in for Rafael Nadal after he clinched his record-breaking 21st major title, the one that stood out was by his fiercest rival Roger Federer. “A few months ago we were joking about both being on crutches,” wrote Federer. “Amazing. Never underestimate a great champion.”

Federer, who had been locked in a three-way tie with Nadal and Novak Djokovic at 20 singles majors, has been burned by Nadal’s competitive fire more than anyone else. He knows what Daniil Medvedev might feel like, to be thrown into the belly of the beast. Of feeling like there is no way out. But incredibly Nadal is still at it, playing with the same relentless physicality, almost two decades after he made his professional debut,

The 35-year-old Spaniard battled back from two sets down to defeat Medvedev 2-6, 6-7(5), 6-4, 6-4, 7-5 after five hours and 24 minutes. And he did after being almost on crutches due to a foot injury and missing most of the latter half of the 2021 season. In December, Nadal had also tested positive for COVID-19, which disrupted his pre-season training.

“Being honest one month and a half ago I did not know if I would be back on the tour playing tennis again,” Nadal said during the trophy presentation. “Today I am here in front of you with this trophy. You don’t know how much it means to be back here. Without a doubt, it is one of the most emotional (periods) of my career.”

After the final shot from Medvedev slung into the net, Nadal indulged in probably the rawest, longest victory celebrations he has ever had through the long and decorated career. The Spaniard laughed, he cried, he played to the crowd and spent a few tearful moments with his team. The record 21st major title had also come at his least successful Slam so far.

Since conceding his French Open crown to Djokovic last June, Nadal had played only six matches. When he arrived in Australia, less than a month ago, not many put him down as a favourite to win the first major of the season. This was nine-time champion Djokovic’s domain. The younger players had breached the ‘Big 3’ dominion last year. Medvedev denied the Serb his 21st Slam and calendar Grand Slam at the US Open. The Russian, ranked No 2 in the world, had established himself as one of the best hard-court players in the business. Nadal dropped out of the top-5 in the world.

But the race for the 21st thinned down as Djokovic was deported on the eve of the major. “This Australian Open will still be great,” declared Nadal. And the Spaniard played his part in making it another memorable affair.

The 35-year-old had started his trip Down Under on the right note. He won the tune-up event in Melbourne without dropping a set. Carrying the momentum into the major, Nadal made short work of his opponents in the first two rounds. Even though Karen Khachanov and Adrian Mannarino tested him, Nadal’s first real test came against Denis Shapovalov in the quarter-final.

The young Canadian, left-handed like Nadal, mounted an incredible comeback, rallying back from two sets down to take the match into the decider. But in the fifth set, Nadal outlasted Shapovalov, 13 years his junior. The Spaniard admitted he was ‘physically destroyed’ after the five-set, four-hour encounter against Shapovalov.

As it turns out, he still had some fuel left for the final. Medvedev won the first set, stopped Nadal from serving out the second set before taking it in the tie-breaker. But somewhere at the back of the court Nadal kept waiting, kept believing. More importantly, he kept running.

Over the past three years, Medvedev has impressed with his tactical skills, the way he builds points, defends his keep. Medvedev, bidding to become the first men’s player in the Open Era to follow his maiden Grand Slam title with another major, had hit all the right notes: he had 23 aces to Nadal’s five, 76 winners to Nadal’s 69, 52 errors to Nadal’s 68 and 189 total points won to Nadal’s 182. Over the five sets, however, Nadal broke the Medvedev serve one more time.

Once Nadal had muscled back from 0-40 down at 2-3 in the third set, the comeback was on. He started hammering down the top spin forehand into Medvedev’s weaker wing. A fired-up Nadal had the crowd’s backing and he rode the wave to win the third and fourth sets.

It took two competitors to make turn that match into an epic. Medvedev kept his end of the bargain, making it as difficult as he could for his opponent. A last-gasp effort saw the Russian break Nadal when he was serving for the Championships at 5-4. But energy and hope was slowly draining from the Medvedev. A physically and emotionally wrung Medvedev was instantly broken again and at the second time of asking, Nadal served out the match at love.

“After the match I asked him, ‘Are you tired?’ because it was insane,” Medvedev said at the presentation ceremony. “You raised your level after the first two sets for your 21st Grand Slam title. You are an amazing champion, it was unbelievable.”

It was not the first time that Nadal has improbably come back from a grave injury and long recovery process to claim a major title. But at 35, a defiant Nadal continues to reach for new highs, plot more elaborate heists. He now stands at the peak in men’s tennis, alone.