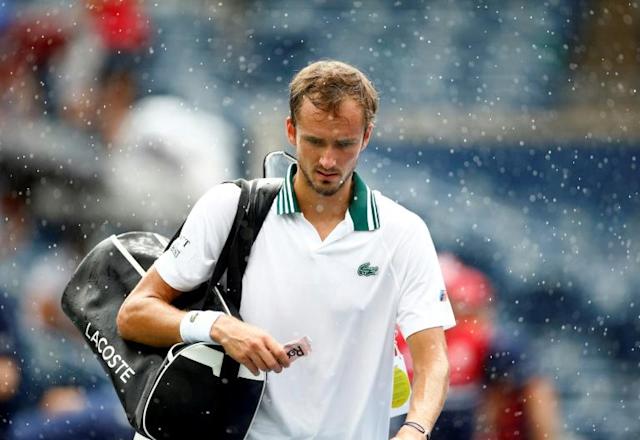 Toronto: A nagging left foot injury forced Rafael Nadal out of the ATP Toronto Masters on Tuesday as top seed Daniil Medvedev rallied to reach the third round.

Nadal, a five-time champion in Canada, pulled the plug on his participation before his scheduled second-round opener with plans to return to Spain for treatment of the injury which kept him from Wimbledon and the Tokyo Olympics.

“I’ve had this issue for a couple of months,” he said. “It is not a happy situation after all the success that I had here in Canada.

“I need to go back (to Mallorca) and try to find a way to be better again. With this pain, I’m not able to enjoy (playing).

“I believe that I am not able to compete at the level that I need because the foot doesn’t allow me to move the way that I need.”

Nadal was the second seed in the hardcourt tournament.

Top-seeded Russian Medvedev opened his week in the second round after a bye and staged a fightback to overhaul Kazakh Alexander Bublik 4-6, 6-3, 6-4.

The Russian came back a changed man after a second-set rain delay.

“I was not playing well before the rain,” he said. “I was not feeling the ball and was missing on returns.

“I just wanted to play better – I knew I had to if I was going to win.”When we got back on court, I felt much better from the first game.”

'This is gonna be on Tennis TV, bro!'

Medvedev advanced with 27 winners and 28 unforced errors in the two-hour victory.

Asia’s leading player, who reached the quarter-finals at the Games and followed up by reaching the semi-finals in Washington, broke the 59th-ranked Serb five times in their match lasting for just over two hours.

“I knew his level would drop in the second and third sets,” said Nishikori, who next faces Poland’s Hubert Hurkacz.

“I was just waiting for it. In the third set he started missing more, so I just tried to stay focused.

“My level is good, I’m playing some of my best tennis so far this year over the last couple of tournaments. I’m back on track now.”

“Today was one of the best matches I’ve played in some time,” Isner said. “I have a lot of confidence coming from Atlanta.

Aced on MP by Basilashvili, Brooksby fires his stick off the side signage boards. Not TOO close, but not far from the service linesman which, considering there's no one in the place is unfortunate.
26 60 64 pic.twitter.com/mDnLuNJvTq

“It’s no secret I love paying in North America, I’m glad to be here.

“I may be a bit long in the tooth,” the 36-year-old added, “but I’m enjoying it on court and still have the willpower to go out and win.”

Brooksby erupted as he was aced on match point, firing his racquet angrily into advertising hoardings at the side of the court.